When St Estevam grew paddy to keep the rampaging builders away

…and then this happened: Over 500 families converted their fallow lands to fertile fields 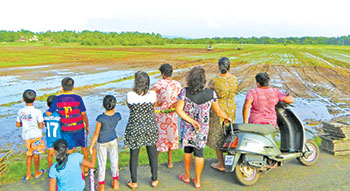 St Estevam or Jua as her loved one’s call her is a beauty transfixed in a time bubble of a glorious past. It is also a village transformed.  As 500 families hold hands figuratively and literally and look at their once fallow barren fields explode as cynosures of fertility and bounty, this story has a heartwarming conception tale. A tale told, lived and shared by the proud folks of Jua and their well-wishers.

It is perhaps one of the rare stories of not just Goa but India where villagers took to farming as a form of activism and protest. Towards the end of 2017, they learnt that there was a road being planned to benefit a housing project in this eco-sensitive riverine village, which would actually cut through many fields and completely destroy the ecosystem of the village; the village of Father Bismarque, who till his dying day, fought against the erosion of the village identity, the infusion of megaprojects and the damage done to khazan lands and paddy fields.

It is then, that the young of the village, with a lot of inspiration from the electronic engineer, turned agriculturist Nestor Rangel, in his early fifties, stepped in.

Rangel realised that a lot of lands were under the Communidade but lying fallow. “Many in the village did not even know where their lands were. It is then  that the trio of young people Ansyl (Gonsalves), Ashwin (Varela) and Swizel (Fernandes) decided to download details of the ownership of over 500  lands as mentioned in Forms I and IV, (which records ownership and tenancy),” he said.

Continuing, Rangel outlined the challenges “Owners were dead and gone. And their next generations did not even know where their ancestral lands were”

But the spirit of youth and the patience and vision of experience worked. A farmers club called ‘Ilha Verde’ or ‘Green Island’ was formed, to start work on the lands and make them fertile and grow crops. “All we wanted was the builders and those who passed such road projects to see farms and fields in full bloom, so that they couldn’t build their roads or even if they did, we could put a good fight”

But funds were needed. An amount of Rs 3.50 per square metre was fixed as an investment. So if someone had 2,000 square metres, his investment would be just Rs 7,000. The actual, cost of buying seeds, equipment, preparing the soil came to about Rs 5 per square metre. The deficit was taken care of by Rangel and some others from their own funds. The money went into the bank account of the Ilha Verde Farmers club’ from which, all expenses were made and earnings deposited

In season 1, 5 lakh square meters came under paddy cultivation, with families working together, on the farms, true daughters and sons of the soil. One of their hands-on teachers was Shailendra Afonso, better known in the fields and homes of Jua as ‘Dudush’.

In 2019-20, the people of St Estevam (Jua) doubled the area under cultivation to 10 lakh square metres.

Heavy flooding due to the opening of the sluice gates finished the paddy crop which rotted. About Rs, 30 lakhs were lost. Rangel and another friend bore the brunt of it and paid back the villagers their investment, but when to compensation, the government has not yet given any. And that too, for a very unique reason. Compensation is not given to a club and only to individuals and the hard-working cultivators of Jua do not have individual krishi cards. The travails of bureaucracy.

Jua’s seafarers return to the fields, to sail the boat of activism and revival

Undeterred, they are back on the fields. And this time, look who has joined them. The returning seafarers of the village, who are back home due to the pandemic and might well stay back and help in the twin tasks of protecting the village from  marauding builders and reviving their lands for future generations. And Shailendra Afonso is guiding the seafarers, handholding them as they steer a different ship

Help has come from all quarters. The involvement of village priest Fr Eusico and the farmer priest of Don Bosco, Father George Quadros has made the mission stronger and blessed.

The results are there to show. In 2018-19 (before the year of the flooding) about 40,000 kgs of rice was made out of 80,000 kgs of paddy grown. Of this 25,000 kgs was given back to the members of the farmers club. And the proceeds from the sales of the remaining rice gave them a profit of about 3 lakhs which they used to repair a broken sluice gate.

In case you haven’t noticed, this is entirely a community effort with no hand of government with profits of farming plouged back for the community.

Their work has been so exemplary that the village is now distributing seeds to the agriculture department for them to distribute to other farmers.

This is an eco-system of excellence built on a bedrock of protest, but on a foundation that has led to a rebirth of a farming village- secure, independent and very very proud.