When the going gets tough, the tough get going

As frontline warriors are fighting a new pandemic against time, nothing could have prepared some of them for days as COVID-19 patients. While the viral outbreak has engulfed Goa and South district, in particular, these Corona warriors continued to fight the unprecedented times until they were detected positive for the virus. The dreaded virus has nonetheless not succeeded to create fear among them as the warriors are returning victorious to the battle. These large-hearted workers go out of their way to help others and have to make many personal sacrifices such as the time they get to spend with their family or dealing with discrimination and stigma from the society based on fear for COVID, despite all that they have done for the public. VIBHA VERMA shares their story 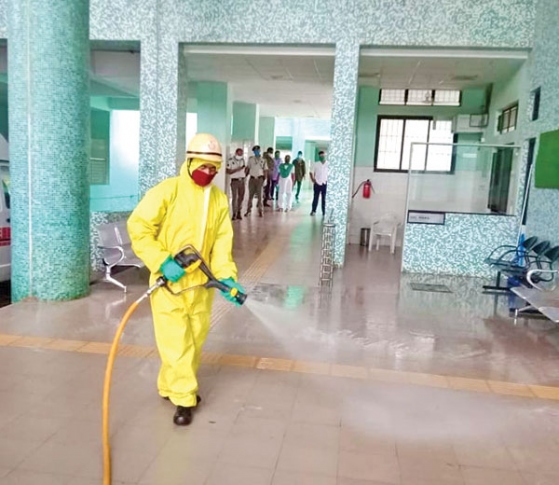 Not many days ago, a 30- year-old nurse from a remotest part of Goa received a text confirming she was COVID-19 positive. Even though initially she was taken aback as all precautions had been taken during the duty, she did not lose her courage.

“I was tested positive but asymptomatic. I did not have any other complications. I recovered in less than 7 days… While serving humanity, we are bound to face such situations,” she said, whilst undergoing home quarantine.

The nurse, who requested to keep her identity concealed, is determined to join back work in the same vigour as before.  “I am ready to work again but before that, I will spend quality time with my child,” she said with a heavy heart, as the virus has distanced her from meeting her infant.

At least 40 doctors and health workers who are amongst the first in the line of the duty have taken ill due to the virus, as on date. Police personnel and fire fighters too became statistics of Goa’s COVID-19 cases in the past few days but the fight against the airborne infection goes on.

While the nurse is awaiting her turn to resume duty, here’s a constable who is already back in action. Suresh Rathod was the first COVID-19 case in the police department.

Possibly also a first instance since the outbreak, six members of same family was tested positive for the infection. The constable, posted at Colva police station was indeed startled when COVID-19 cases gripped his family, one by one.

While his father was the only symptomatic patient, the remaining did not show any symptoms. “My father was admitted to Chicalim Cottage Hospital as he was unwell. Suddenly his pulse rate dropped. I insisted to the doctors that they admit him. The next day, doctors referred him to GMC where he was kept under observation. He was tested for COVID-19 the following morning and the report was positive,” he recalled.

Suresh, his mother, his pregnant wife and two of his brothers also tested positive and were rushed to COVID-19 designated hospital at Margao.

Although a panicked situation surrounded the Rathod family, they remained stable when it came to their psychological state of mind, based on which, they cooperated with the treating doctors, to help them overcome the virus. While they were being treated at the ESI COVID Hospital, the staff from the Colva police station also rushed to get their tests done while fire fighters were requested to get the entire premises sanitised.

The brave cop recalls that though his father was initially in a serious condition, the family stood by each other. Repeated calls from his superiors also motivated Rathod, resident of Mangor Hill – Goa’s first containment zone - to fight the invisible battle.

“I was tested positive on June 2 and discharged on June 23 after two tests came negative. I was thereafter home quarantined along with my family and resumed duty on July 7,” he said. The long duration of his recovery is due to the old Standard Operating Procedure (SOP) wherein two negative tests and 14 days home quarantine was a must.

Strict nutritious food, warm water, medicine and moreover moral boosting conversation with the doctors as well as his superiors kept his days going in the ESI; and thereafter at the COVID care centre at MPT. “We were not allowed to get food from outside. No much of masala was included in our food because doctors did not want to take a chance when it came to digestion. They also ensure that all the patients are well hydrated, as it is one of the main components to recover,” he said.

Even after the ESI hospital’s canteen was shut because one cook tested positive, the patients continued to get proper meals.

Now back on duty, Rathod is ready to carry on with the field duty. “We are in the police force. Whenever there is a call, we don’t hesitate to carry out our duty,” he said.

Colva police in-charge Melson Colaco has accepted that the news did come as a little worry but frontline warriors are meant to take up risks for the safety of citizens.

“When we were informed that Rathod was positive for COVID-19, all the staff underwent testing and the police station was sanitized. The staff did not go home till their results confirmed they were negative,” Colaco said on being asked about the stress considering Rathod was the first case in the department.

Interestingly, Colva police station which does not have a proper barrack saw some policemen making alternate arrangement for stay. These khaki-men, even before the pandemic, have been living in rented rooms. On the night they were tested, some of them even booked hotel rooms, whichever were available.

But these situations, Colaco said do not discourage them. “We take up the risk. We have to give equal time… The entire department is on its toes since the outbreak, and since we are in Margao jurisdiction we have even assisted our Margao police team during repatriation of stranded migrants. Most of the time we were under stress but we still perform the duty,” he said.

Vasco, Mormugao and thereafter nearly 40 COVID cases at Ponda police station were reported; prompting the department to repeat its safety advisory among the force.

In Vasco, located at the epicentre of the disease, two frontline warriors – police constable Shirvram and lady home guard Lata were given a warm welcome on defeating the infection and resuming their work at the police station. Greeted with flowers and congratulatory messages, the staff – in fact the department – has set an example that stigma does not exist.

Herald also spoke to Lata who has served in the containment zone, airport besides other duty points. Recovered within 12 days of being infected, Lata was an asymptomatic patient. She was amongst many of her colleagues who underwent the testing after the police station reported a COVID-19 case.

While others were negative, Lata tested positive for the infection. “I was taken to the Shiroda Care Centre since I was an asymptomatic patient,” she said as she recalled that she shared the ward with 12 other women COVID-19 patients. “Social distancing was well maintained although we were 13 females admitted in the ward,” she said. 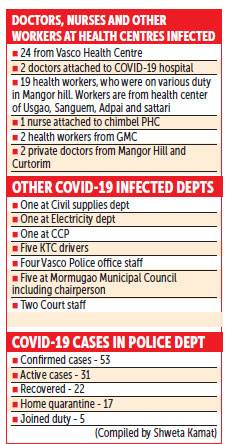 While food and warm water was regularly given to them; Lata explained immunity booster medicine besides ‘Chawanprash’, was to be consumed daily on the advice of the doctors.

As she completed her hospital duration on June 30 following a negative report and 7 days of home quarantine, Lata said she continues to take immunity booster supplements to keep her fit.

The department is indeed going through a tough phase in the wake of its policemen being infected with the virus. However, the superiors have been motivating their staff to carry on with the duty, besides taking all the precautions to fight the disease.

The police stations have intensified safety standards as online complaints are being accepted and visitors are allowed only if needed. Thermal scanning, sanitiser, face masks and social distancing is the key at each police station.

Among the recovered policemen are Shivaji and Manjunath Yaragatti from the Mormugao Police Station.

The Fire Dept also saw six cases of infections of COVID-19. Just this week, the personnel from headquarters and Kundaim fire station were found to be positive.

Speaking about this, Director Ashok Menon, said the cases have been reported in the Department following intense testing and that they are undergoing quarantine at various COVID-19 Care Centres.

While two Fire Dept personnel have been shifted to Peddem in Mapusa, one is quarantined at Calangute Residency and three are at COVID-19 Care Centre Shiroda.

“These Fire Personnel are recovering well,” the officer said.

The Dept has appointed Shrikrishna Parrikar, Station Fire Officer as the Nodal Officer to interact with these Fire Personnel and to ensure that they are feeling well as well as checking to see if they need any help from the Directorate.