Who would have thought: 54 years later, Goa is once again searching for Asmitai

Don’t blame the bhailes. The bhitorles have a lot to answer for. Julio D Silva speaks and hears the voices of those who deeply understand identity and have an acute sense of its loss. It is a lament which is personal as well as universal 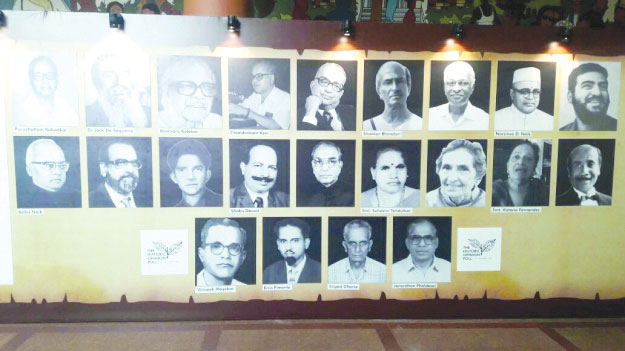 Even as Goa celebrated the 54th Anniversary of the historic ‘Opinion Poll’, which remains the only referendum held in independent India, there appears to be a general consensus that the Goan Identity is diluted to such an extent that it cannot even be seen. Interestingly while some blame the politicians for this deterioration there are others who hold Goans themselves responsible for the present situation.

Auda Viegas, a social activist taking up women and child issues asked, “where is the Goan identity”; and answered “my fields have been filled up to construct buildings, my beautiful hills have been cut to erect concrete structures and my sobit, sundor Goa has been destroyed in the name of development.”

She lamented that the Goan ethos has been permanently destroyed and argued that today tourists are being attracted to Goa for casinos, drugs and prostitution instead of natural beauty and inborn hospitality of Goans that brought the first tourists to the land.

She pointed out that the ongoing struggles of the people of Goa are a dying struggle by them to preserve the Goan identity. The government turning a deaf ear to them is evidence of the fact that the Goan ethos has deteriorated.

“Do you remember that a major factory in Goa was shut down in the past after listening to the people’s protests and today the government and MLAs are not even willing to listen to protesting people,” she said asking where is the Goan identity seen in such a situation.

Advocate Savio Coreia from Vasco says “Goan identity” is a complex concept that is dynamic and in transition and pointed out that Goans have changed their perception of their identity. He said language and soil are important components of identity.

“Konkani language, according to me, is the most important aspect of defining Goan identity. The Opinion Poll was a decisive moment for preserving the Goan identity. Victory was possible only because of the partnership of the Hindus and the Catholics,” he said.

However he admitted that Goa is losing its identity and the best place it is visible is on social media. He said instead of blaming the outsiders or “bhaile” it is the “bhitorle” especially within the political class who are responsible for the present situation and will bring more danger in future, which could even result in the total annihilation of the unique Goan identify.

“Many of the political class are yet to get over the merger mentality specially the current generation of politicians,” he said.

Dr Sushila Sawant Mendes, a well-known historian said having a puritanical approach to Goan identity would be self-defeating and pointed out that heritage, culture, music, language and even dance forms the Goan identity.

She argued that the identity evolved by blending the ethnic Goan culture with that of the Portuguese during that time and said that over a passage of time there has to be some erosion as is happening in Goa at present.

“We cannot blame others but need to ask the question, what have I done?” she said. Culture and identity will change by assimilating things happening around and that is exactly what is happening in Goa today,” she added.

Pearl D'Souza, a lecturer at Carmel College differed and opined that what is happening presently in Goa is the actual Goan identity. “The susegad Goan rises violently when required like the patient man turning furious and that is what we are witnessing right now,” she said.

Pointing out to the various struggles in different parts of Goa she said Goans after a long slumber are now awakening to their rights and objecting to the wrong proposals mooted by the government and that is Goan identity, which enables them to think for themselves and their well being.

Advocate Radharao Gracias was point-blank in stating that there is no Goan identity visible in Goa and one would have to go probably to London, Melbourne or Lisbon to find it. “Those who said they are Goan, are leaving the land and those who wanted to merge Goa with Maharashtra, are staying behind,” he said.

He argued that though they may be residents of Goa they never identified or accepted the Goan culture or identity and unfortunately, they are ruling the roost today. “Goan identity is no longer visible in socio-cultural aspects as that had gone long back,” he said.

Advocate Cleofato Almeida Coutinho, said Goan identity can be seen in geographical, cultural, architectural and to some extent in the language in present times with the whole idea of Goa and Goan centring on the land.

“In the 60s, it was more of culture and cuisine but presently because Goans fear that their land is going away from their control the fear and crisis of Goan identity has arisen,” he said referring to the fear of non-Goans buying prime properties in the State.

“The demand now is to protect Goan land going away from Goans and that is why this whole issue of Goan identity has come up,” he said, while pointing out it was Goans who were selling their land to non-Goans.

Advocate Uday Bhembre, who was one of the stalwarts of the battle during the opinion poll, is a totally disappointed man today very honestly stating that the Opinion Poll “failed” as the distinct identity of Goa, which was sought to be preserved through it does no longer exist.

“We could have been a model State for others to follow as our economy was good our literacy rate was higher than most other states of India; and yet what have we achieved except that we got the Official Language Act passed only because we had our own Goa assembly then and thus got our own identity in the country based on our language,” he said.

However, he opined that the people failed in electing the right persons due to which, today politics has become a business where profit is sought instead of it being a service-oriented mission and said present politicians have no respect for literature, or opinion poll or even the State of Goa.

“That is why in the last decade not a single issue has been resolved in Goa and even something minor like Sonsodo is languishing unattended,” he said.

Similarly, Dr Francisco Colaco who is well known for his social activism as for cardiology is a disappointed man and opined that the valiant struggle of ancestors to preserve Goan identity “has been in vain”, as present Goa has nothing of the glorious past that it boasted of.

“The Opinion Poll has turned into a nought and our politicians have let us down completely and the way they act after getting elected is truly a sad commentary on what is happening in present times,” he said. However, he said events like Opinion Poll need to be observed so that it can remind people of what is lost.

“I have lost almost all hope and only pray to Goa that something good will happen to arrest the tide flowing at present,” he said.

However youngster Rupesh Shinkre from Curtorim, who is a consultant and trader, had a different viewpoint and asserted that Goan identity, is very much prevalent though it has diluted a little bit and lamented that the government is not doing anything to preserve it.

“We live in a democracy and have a right to elect the people of our choice and anything is wrong we are to be blamed because we have been electing the wrong persons,” he said, while stressing the need for people to be judicious while voting.