Why is State DRAGGING FEET on mining RECOVERIES? 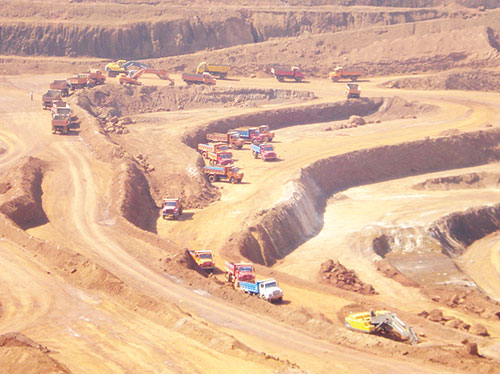 t was first said the illegal mining in Goa was worth Rs 35,000 crore as per the Justice MB Shah report.

Then the chartered accountants found that Rs 3,400 crore was to be recovered from mining companies for illegal ore extraction and export; and the Supreme Court asked the State to immediately act and recover the amount.

Former Director Mines and Geology Prasanna Acharya had in his note on 15.01.2019 said that on 06/10/2010, Directors/partners of the erstwhile leaseholders had admitted that they have dispatched mineral allegedly from rejection dumps without payment of royalty.

“Most of these letters are inwarded in this office on 20/10/2010, while other doesn’t bear the entry number. By these letters, the department is also informed about delayed payment of royalty on such mineral allegedly recovered from dump reserves with interest on D.M.T basis and also requested to take said communication assessment, on record for completing assessment,” the note said.

He pointed out that the Rule 64A of MC Rules 1960 empowers the State Government to charge interest at the rate of 24% per annum at simple interest from the 60th day from the date fixed by the Government from payment of royalty, etc.

The operating part of Goa Foundation judgment passed by Supreme Court of India on 07/02/2018 expects the State to expedite recovery of the amount due from erstwhile lease holders to the State Government unless there are very good reasons for rejecting them, he said.

He also pointed out that the Apex Court in Goa Foundation judgment dated 21/04/2014 held that whenever there is a conflict between the MMDR Act and the MC Rules 1960, the provisions of the Act shall prevail over the Rules.

“Sub-Section(2) of Section 9 of the MMDR Act, 1957 mandates payment of royalty in respect of any mineral removed or consumed by lease holders from the lease area at the rate specified. Rule 64/C of the MC Rules, 1960 requires payment of royalty on dumps tailings or rejects stored outside the lease held area only when such tailings or rejects are used for sale or consumption on later date,” he had noted.

As such, the former director had noted that the date specified for payment of royalty under Rule 64 of Mineral Concession Rules 1960 has to be before or at the time of removal or consumption of mineral from the lease hold area, held area or tailing or rejects stored outside lease, as the case may be before or up to its removal for sale or consumption.

“Any dispatch without payment of royalty after the first day of the subsequent month from the date of dispatch whether bonafidely done or otherwise, should invariably be treated as illegal dispatch entitling State Government to recover the sale value of mineral in exercise of power under Section 21(5) of the MMDR Act 1957,” he had said.

Further, he said that in the instant cases, a large quantity of 7.34016 million tonnes of ore, was dispatched without payment of royalty, neither at the time of dispatch nor on the first day of subsequent month.

a) Treat dispatch of 73.4 WMT from leases mentioned to be illegally dispatched and in violation of provisions of Section 9 read with Section 21(5) of MMDR Act and Rule 64/C of MC Rules 1960 in case the alleged dispatched as claimed by leaseholder is from dump tailings or rejects.

b) For the purpose of recovery of interest under Rule 64(A) to declare date of receipt of order to be the date fixed by the State Government.

c) Authorized the undersigned to seek recovery of mineral value from the erstwhile lease holders and/or the persons responsible for such illegal dispatch.

“Submitted for urgent approval as crores of rupees could be recovered from such illegal dispatches,” he had said.

Nelita Olga Fernandes e D'Silvam, Assistant Geologist, in her note on 24/06/2020 too said that the ore was illegally exported.

“It is revealed that the erstwhile lease holders have paid royalty and the interest applicable on a quantity of 73,40,136 WMT for the period 2007-2008, 2008-2009 & 2009-10. The said quantity was later reported to be disposed of. It is also reported that the parties have not disclosed the said quantities in their monthly returns, however have requested this Department to take the said communication on record for completing assessment,” she said.

The Geologist noted that the as per section 9 of MMDR Act 1957, the holder of a mining lease is required to pay royalty in respect of any mineral removed or consumed by him (at page 45/C). Rule 64 states that in case, such dumped tailing or rejects are used for sale or consumption on any later date after the date of such dumping, then such tailing or rejects shall be liable for payment of royalty.

“As per the communication, royalty shall be due on every first day of the month and any delay in the payment of royalty would entail a liability on the lease boulder to pay simple interest @24% p.a. from the 60 day in terms of rule 64 Aol MCR. 1960. Since in the instant case, the quantity of 73,40,136 WMT, of ore, was dispatched without the payment of royalty, neither at the time of dispatch nor on the first day of subsequent month and subsequently notices were issued to the lease holders as mentioned.

Despite all these notices, Chief Minister Pramod Sawant on his noting dated 24/06/19 only said “May discuss”.

Thereafter, the recovery file has been moving around without any result.

-
Goa Foundation says State ignored every illegality
Goa Foundation, in its petition has said that rapacious and rampant exploitation of the State’s natural resources is the hallmark of iron ore mining sector - coupled with a total lack of concern for the environment and the health and well-being of the denizens in the vicinity of the mines.
“The sole motive of mining lease holders seems to be to make profits (no matter how) and the attitude seems to be that if the rule of law is required to be put on the backburner, so be it. Unfortunately, the State is unable to firmly stop violations of the law and other illegalities, perhaps with a view to maximize revenue, but without appreciating the long term impact of this indifference. Another excuse generally put forth by the State is that of development, conveniently forgetting that development must be sustainable and equitable development and not otherwise,” the petition says.
GF petition adds that laxity and sheer apathy to the rule of law gives mining lease holders a field day, being the primary beneficiaries, with the State being left with some crumbs in the form of royalty.
“For the State to generate adequate revenue through the mining sector and yet have sustainable and equitable development, the implementation machinery needs a tremendous amount of strengthening while the law enforcement machinery needs strict vigilance,” it says.
It further added that ‘unless the two marry, people will continue to be mute witnesses to the plunder of our natural resources and left wondering how to retrieve an irretrievable situation’.
“The State (government) ignored the fact that every single mining lease holder had committed some illegality or the other in varying degrees. To identify these illegalities (although they had already been identified by the Justice Shah Commission and by the EAC), a Special Investigation Team had been set up as also a team of Chartered Accountants. Instead of waiting for a report from any one of these teams, the State acted in violation of the Grant of Mining Leases Policy and renewed the mining leases.  Why was the report from the ‘Special Investigation Team’ not awaited or called for and examined?” the petition questioned.
Related news