‘Got to be more intense, aggressive in final third’ 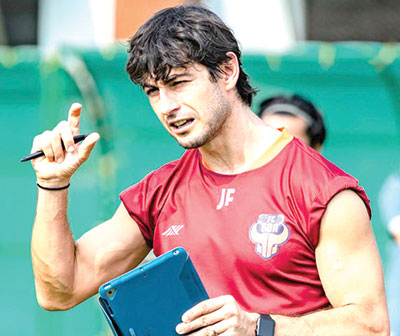 PANJIM: FC Goa were denied by NorthEast United for their first win in ISL Season 7 following their 1-1 draw on Monday.

Like all their previous encounters, Juan Ferrando’s side dominated against the Highlanders at Fatorda Stadium, but their performance isn’t reflecting on their results. Despite playing some finest football, the Spaniard believes his side still needs to work in certain areas of the game.

“We are still trying to get an idea about how to play in the final third of the pitch. We have to be more intense and aggressive in the final third,” Ferrando expressed while addressing the post match conference at Fatorda Stadium.

In every game so far, FC Goa started with different faces specially in the midfield and the coach revealed that he is still in search for a favourable eleven

“The team is working and I am so satisfied. We have some problems but the team is working hard. We are finding the best playing elevens and we are helping the players,” added Ferrando.  “They have grown in some aspects but it is necessary to change some details,” he concluded.