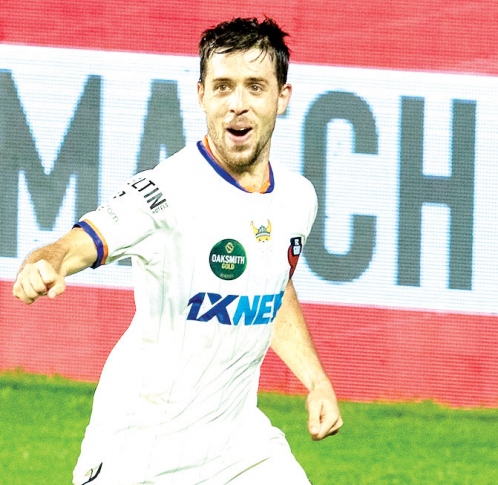 VASCO: FC Goa scored quadruple and more importantly they finally got their first win and three points in the Indian Super League after winning a 4-3 thriller against SC East Bengal SC at Tilak Stadium, Vasco, leaving the Kolkata outfit without a win in their last nine league matches.

Alberto Noguera smashed in two goals and Jorge Ortiz converted a penalty kick for Goa. SC East Bengal’s Perosevic scored on either end. He netted a brace, but also ended up putting the ball into his own net. Dervisevic was the other scorer for the Kolkata side.

This match was important for both sides, who had been struggling in this edition, hence points at stake were a sigh of relief. The high-intensity game was a thriller with the goals coming in at regular intervals. It was physical, intense and had the goals, which had the players celebrating but the either side's coaches stood still. But for Goa, this surely was a morale boosting win which might help them get back on track.

FC Goa’s inability in set pieces was exposed once again in the game as they conceded twice from set pieces in the game and the third from a poor defensive play. But the positives besides the three points were the goals they managed to get. That's progress for Juan and his team.

Coach Juan Ferrando made four changes to his side benching Dylan Fox, however, Mohammed Ali was given his first start of the season. Seriton Fernandes, Saviour Gama and A Dohling were the others to start for the Guars. Meanwhile, SC East Bengal made five changes in the team.

Having maximum possession and showing attacking glimpses, it was evident the Gaurs would strike early and the goal arrived in the 15th minute with Alberto Noguera scoring a screamer.

But the Gaurs conceded from a set-piece in the 27th minute. Dervisevic’s free kick slammed Edu Bedia’s face but Perosevic was fast to connect a brilliant volley which rattled the post and entered the goal. FC Goa keeper Dheeraj Singh couldn’t help much but just admired the ball roll into the goal.

But the Gaurs were ahead in the game at the half hour mark when Seriton Fernandes was brought down in the box. Ortiz took the responsibility and delivered in style to regain his side’s lead.

The Gaurs failed to learn from their earlier mistake and conceded yet another goal from a set-piece. This time Dervisevic’s curling free kick from the right failed to get to any East Bengal player and the ball curled in at the far post.

But the Gaurs were lucky to walk into the breather with a goal cushion. Ortiz’s corner kick was flicked in by Devendra Murgaonkar, however, his effort came off Perosevic and dropped into the goal.

SC East Bengal kept persistent pressure on Gaurs and they succumbed at the hour mark. Glad Martins needlessly played a back-pass which was intercepted by Perosevic and slammed past Dheeraj Singh to bring the scores on level terms.

FC Goa’s fourth goal was a treat to the eye. Glan Martins played a cross field pass to Ortiz, who did really well to play a low cross where Nongdamba did exceptionally well to sell the dummy to East Bengal defenders, setting Noguera lone at goal. The Spaniard made no mistake sending the ball at the back of the net to make it 4-3.