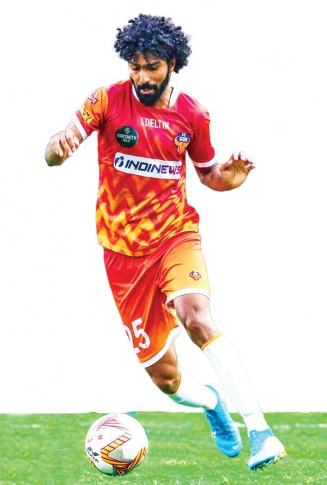 PANJIM: As Igor Stimac named his 28-man squad for National duty, the list featured five Goans. There was one new face--yet a familiar name– Glan Martins among those selected.

Earning his first national call, there were no doubts Glan deserved the call more than any other after his impressive performances in ISL and AFC Champions League.

The 26-year-old couldn’t hide his joy as he said, “Every player desires to play for the National team and I have no words to express how happy I am at the moment to get this opportunity to sport the National colours. I am joyous, proud and excited to play for my country,”

After having a slow start to his debut ISL season with Mohun Bagan, it was the winter transfer switch to FC Goa in January which brought a new lease of life to his campaign propelling FC Goa to their unbeaten run to the semis. “Joining FC Goa was the biggest game changer. Coach Juan Ferrando brought the best out of me. He trusted and believed in me and which helped me gain more confidence and I was able to give my best during the matchdays.

Moreover, as a personal achievement, it was Glan’s individual performance which cemented his position at a club which boasts of one of the strongest midfielders in the National league. “I was giving my best in every game. I realised there is no scope for errors at the highest level and I had to give more than 100 per cent to ensure the place in my team (FC Goa) which helped me in getting the best out of me. I personally feel after my recent performance during the AFC Champions League I deserved the National call,” explained Glan, who truly deserved the call

Glan is known for his lethal long range strikes which he demonstrated against Mumbai City FC with a stunner which made him known across the nation and Indian football fans across the globe. Having been a mainstay in Ferrando’s squad, Glan aims for consistency at National camp too.

“It’s all about being consistent. I have just got a national call but the real challenge is being a consistent name in the team. It wouldn’t be an easy task but I will try to give my best throughout to see that I am always available for the National team coach and suits and fits in his plans. For that there are no shortcuts and I will have to continue giving my best for the club and country,” stated the former Churchill Brothers FC player who was then picked up by ATK MB after a good I-League campaign with the Goan outfit.

The young lad has developed a tremendous fan following in Goa, however the lad is thankful for the support he received from his parents who never failed to attend his single match.

“I would also like to thank my dad, mom and entire family for their constant support throughout the journey. Though I will miss them as this would be the biggest moment in their life, I will ensure that they will get to see me playing for the National team when things get to normal. I would also like to thank Churchill Alemao and late Peter Vaz for their support in my earlier days.,” concluded Glan who played his initial years at Sporting Clube de Goa.