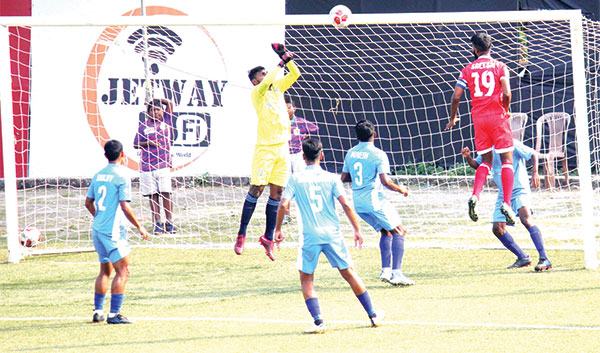 MAPUSA: Calangute Association SC were back in action as they managed to edge past Sesa FA by 2-1 margin in the CAM Goa Professional League played at Duler stadium here on Tuesday.

After the win, Calangute Association has 11 points while Sesa FA stays on 8 points both the teams playing their sixth league match.

Calangute Association having lost their last league match to Vasco SC came strongly in Tuesday’s match and took the lead in the 23rd minute through Nitesh Hazra. Joywin Carneiro 25-yard free kick was headed by Nitesh Hazra which was blocked by Sesa's keeper Roanal Gaunkar and the ball travelled to Nitesh who banged the ball into the goal to give his side the lead.

Sesa lads equalised almost in a similar fashion in the 43rd minute where Shridharnath Gawas free was blocked with a diving save by Calangute's keeper Presley Mascarenhas and the ball came to Kunal Salgaonkar who headed the ball home 1-1.

While at the other end, Calangute's Saeesh Halarnkar header off Joywin cross sailed over the crossbar Cameroon Junior Carret was thwarted by Sesa's keeper in a one-to-one situation.

Just four minutes into the second session and Calangute's keeper Presley was tested by Sesa's Shridharnath but the keeper brought a full stretched diving save.

Three minutes later, a teasing cross by Calangute's Saeesh Halarnkar was timely fisted by Sesa's keeper before Dominic Fernandes could connect the ball.

As the match progressed, Calangute’s substitute Richard Cardozo who was brought in by coach Tome Alvares, saw his strike being collected by Sesa keeper.

However, the keeper could do very little to stop this time Richard Cardozo from scoring from close quarters to make it 2-1.