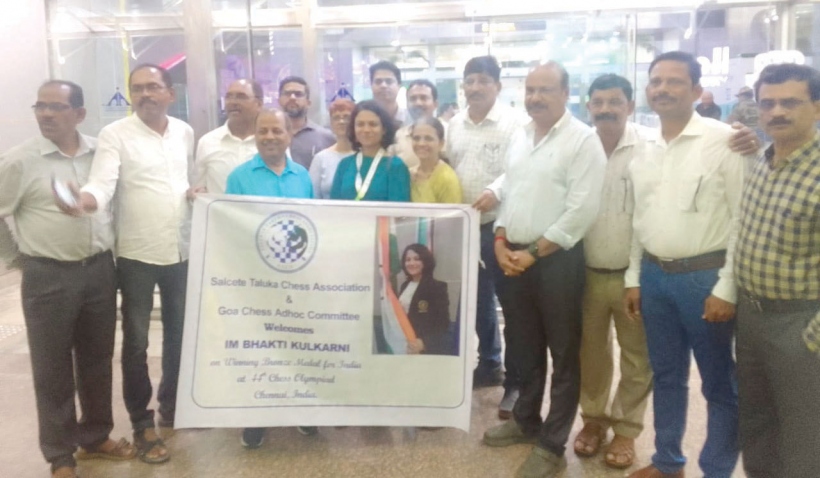 PANJIM: Goa’s Bhakti Kulkarni had a mammoth reception at the Goa International Airport on her return back from the 44th Chess Olympiad held at Chennai from July 27 to Aug 10. Bhakti as part of the Indian team was in the lead at the beginning of the last round but lost to USA in the last round to be satisfied with the bronze medal.

Bhakti Kulkarni resident of Fatorda, Salcete had a golden round by winning the first, second, third and tenth round which she played but lost to WGM Abrahamyan Tatev of USA in the last round.

On arrival Bhakti said that her dedication and hard work had paid off. She thanked her coaches, all her well wishers, members of the Goa Chess Fraternity including the Salcete Taluka Chess Association and the Goa Chess Ad hoc committee. She thanked All India Chess Federation for the opportunity to play in India.

Ashesh Keni of Salcete Taluka Chess Association requested the government to felicitate Bhakti appropriately saying that the Tamil Nadu government has announced a Rs 1 crore prize to each of the bronze winning teams and the Goa government will surely reward her for the epic feat. He said that the department of Sports under Govind Gawde, Hon. Minister for Sports and Director Ajay Gaude has become proactive as can be seen by the presence of the Dy. director to receive Bhakti Kulkarni and the way the Chess Olympic torch relay was conducted.

Mahesh Candolkar said that this is the first time we have a Chess Olympiad winner and a lot needs to be done to take chess to the common man and the associations are doing their work and the government is also working in right earnest will bring in better and better results.