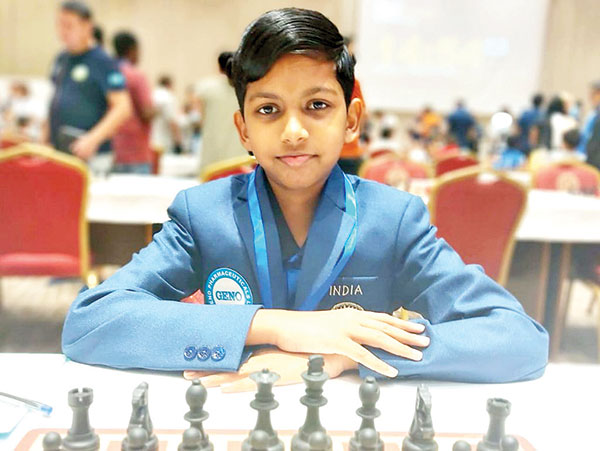 PANJIM: Ethan Vaz of Goa is on a roll at the FIDE World Cadets Chess Championship 2022 (U-12 Open) currently underway at Batumi, Georgia, with a perfect score of 4 points after 4 rounds of the 11-round Swiss system tournament.

After scoring his first two points against Utlu Mustafa Ali (Elo 1386) of Turkey and Zhu Charis (Elo 1350) of Canada, Ethan stunned 2nd seed FM Movahed Sina (Elo 2345) of Iran while playing on the top board. In the 4th round, Ethan got the better of Lisenkov Svyatoslav (Elo 2069) of Russia who was playing under the FIDE flag. At the end of 4 rounds, Ethan is in joint first place and 2nd on tie-break. In the 5th round, Ethan will face the top seed of the tournament, FM Uskov Artem (Elo 2377) of Russia (playing under the FIDE flag).

The World Cadets Chess Championships is scheduled from September 16 to 27, and is being organised as a set of six tournaments in the age categories of U-8, U-10 and U-12, in Open and Girls categories respectively. The U-12 Open category, in which Ethan is representing India, is being contested by 156 participants representing 69 countries, including 4 FIDE Masters and 3 Candidate Masters.

Ethan expressed that he is thankful to his sponsors Geno Foundation and everyone who has contributed towards his crowdfunding campaign. "I feel privileged to represent India on the world stage, and I will give it my best," he said.