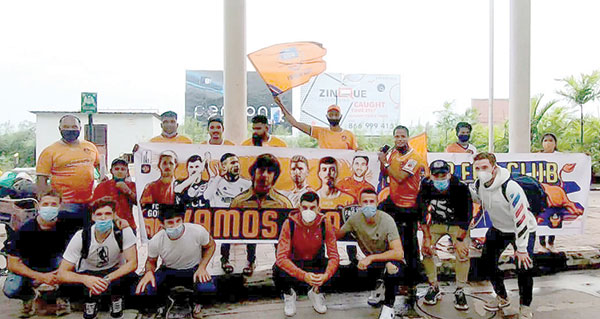 PANJIM: The FC Goa head coach Juan Fernando arrived in the state for the first time ever since he was given the task of leading and coaching the team in the upcoming Indian Super League season, on Sunday.

The Spanish contingent arrived in the state on early Sunday morning wherein they were greeted by a warm reception by the FC Goa Fan Club members who gathered from different parts of the state.

"It's sad that we couldn't give a more rousing welcome to the New Gaurs from Spain as we had to consider the Covid-19 Protocols. We made sure we went as a small group as we couldn't miss out on welcoming them especially the new manager Juan Ferrando who has already struck a rapport with us virtually" - Omi, FC Goa Fan Club.

The coach and the players will be quarantined for a week from today and will have to undergo three COVID19 tests and should test negative thrice and later can join the team for training.

The team is currently training at Dempo Academy ground, Ella under the watchful eyes of assistant coach Clifford Miranda.

James Donachie is the only player left the join the squad and would be arriving later.