FC Goa earn a point, but yet to taste win

Angulo scores the equaliser against NEUFC, records his third goal of the season 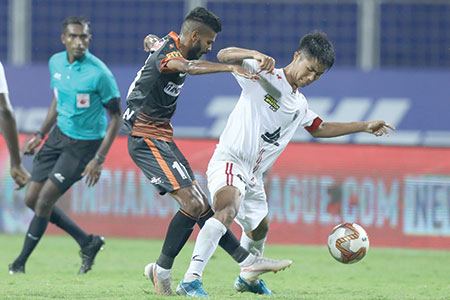 PANJIM: Another impressive performance from FC Goa, yet another draw. The Gaurs were left in frustration, following their 1-1 draw against NorthEast United FC in the Indian super League at Nehru Stadium, Fatorda, on Monday.

Like any of their previous games, the home side totally outplayed their opponents but it’s the result which aren’t going in their favour after they were made to work to claw back to draw the game. Igor Angulo (43’) scored the equaliser before Idrissa Sylla put the visitors ahead in the game.

Almost everyone is doing the job right for Goa, but the goals aren’t just coming despite, the Spaniard scoring his third for the team, in as many games. So far, Angulo has been the perfect replacement for their former star Ferran Corominas but coach Juan Ferrando will have to work a little more to get their first win of the season, as he was seen frustrated on touch-line. He had to be separated by his staff after he got in an altercation with the rival coach Gerard Gus, late in the game.

Knowing the fixture wouldn’t be an easy one, Ferrando named Brandon Fernandes in the starting eleven along with Aibanbha Dohling while Jorge Ortiz was preferred over James Donache.

But the opposition looked well prepared for the clash, as Gus named a surprised starting XI having five new players, from the side which drew against Kerala.

But as expected Goa started on the front foot and Brandon Fernandes displayed what the home side was missing in the previous games in his absence. The Indian international played a great ball to Otiz, who shot straight to the keeper.

The Gaurs were clearly the better side in the first quarter enjoying almost 70 per cent possession. They were all over NorthEast territory trying to create spaces, but their sloppy passing let them down.

NorthEast striker Sylla missed couple of chances before he converted a penalty in the 40th minute. Sylla’s quick feet made it difficult for Goa, and the Guinean earned a penalty after he was tripped by Ivan Gonzalez. Sylla kept his composure to give his side a surprise lead.

But Goa came strongly and levelled terms in the 43rd minute when Brandon worked on the left flank and played a low perfect cross to Angulo, who flicked the ball to score the leveller. Angulo has now three goals from three games.

In the second half, FC Goa had their chances but Angulo and Ortiz --- both failed to convert their chances. One headed over the bar, while the latter’s shot missed narrowly from a distance.

FC Goa nearly scored a winner but Alberto Noguera was unlucky to see his effort from outside the box, hit the post and go out of the play. Earlier, Mohammad Nawaz came with a fine save to stop NEUFC freekick.