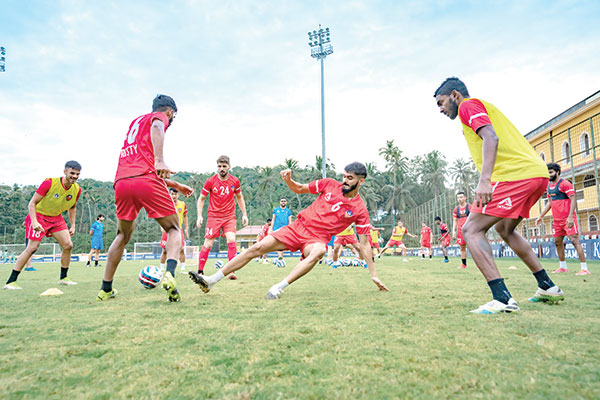 PANJIM: FC Goa need a response after their disappointing 0-3 defeat against their rivals Mumbai City FC in the opening game as they take on Jamshedpur FC at Athletic Stadium, Bambolim, today.

Juan Ferrando's side, though featuring most of his old faces, was disappointing throughout the ninety minutes against Mumbai.  They dictated the play in terms of possession and passing but when it came to creating chances, they did little, having just a single shot on goal. As a result the Gaurs were punished thus ending their 15-games unbeaten run (20 games if considered Durand Cup matches).

The loss against Mumbai in the season-opener was only the fifth time FC Goa have lost by a 3-goal margin in the ISL since the beginning of the 2017/18 season.

FC Goa has shown enough vulnerability in their first game with an inexperienced backline to give teams playing against Goa with a slice of hope in their bid for a result. However, for coach Juan this wasn’t a much concern who continued to trust his players, especially the youngsters.

“FC Goa has two targets: to win games and to improve all the players in our team. At this moment, it is necessary to continue working with them to improve their game. I’m not at all scared, I have trust in all my 29 players as it’s the most important thing. These are the best 29 players for me, it is very important for me to work with them,” stated Juan Ferrando who played Leandre D’Cunha and Lalhmangaihsanga and Sanson in defence.

Though there are high possibilities Seriton Fernandes could make a return in the playing XI, FC Goa will surely continue to miss Brandon Fernandes, Redeem Tlang and Nemil in the midfield, though the last named is in the final stages of the recovery.

From the current squad, four scored multiple times against Jamshedpur FC. Muhammed Nemil, Devendra Murgaokar, Brandon Fernandes and Jorge Ortiz each have two goals to their names.  However, with Brandon, Nemil missing out, that leaves with only Jorge Ortiz and Devendra Murgaokar but we will have to wait to check if Juan will start with the duo as both were benched in their previous game.

When asked what would be his team composition considering the above facts, FC Goa coach Juan Ferrando stated, “I cannot tell my plans. You will have to wait for tomorrow to see that,”

Edu Bedia had been the most hardworking for Juan Ferrando in the first game with his creative flair and excellent positioning making it difficult for the opponents team to stop. He was the lone Gaur to attempt three shots in the game.

Today, Juan faces Jamshedpur FC, who managed to script a 1-1 draw against SC East Bengal in their first fixture.

FC Goa and Jamshedpur have come across each other on 11 occasions in all competitions, including two times in the Super Cup and earlier this season in the Durand Cup (where the Gaurs have prevailed on all occasions). The Gaurs have a favourable head to head record against Friday’s opponent, winning 8 of those 11 matches. Only one game has ended in a draw.

Though the Gaurs proved their supremacy against the Men of Steel in each of the last four meetings, this will be a difficult encounter for Juan.  With both the teams dropping points in the opening encounter, both sides will look to register their first win in the competition.