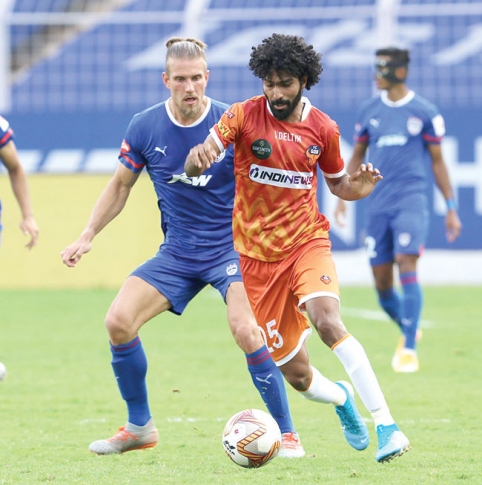 PANJIM: FC Goa scripted a 2-1 win over Bengaluru FC at Nehru Stadium, Fatorda -- A result which has given hope to one while dashing the dreams of another of progressing into the playoffs of the Indian Super League.

The Gaurs have climbed back to third place with 30 points with a game in hand. What's more important is that the Gaurs have matched their own record of the 2014-15 season and Mumbai City FC’s 2020-21 season of 12 games unbeaten run, thanks to goals from Igor Angulo and Redeem Tlang which were enough to get them the three points.

Bengaluru enjoyed a better start to the game however, they conceded in the 20th minute when Glan Martins won the ball against Erik Paartalu and played Angulo, who made his way into the area before slotting home at the farpost.

Goa is a team which doesn’t stop attacking and they doubled the lead in the 23rd minute when  Rahul Bheke failed to clear a cross, Alexander Jesuraj got to the ball and flicked it towards the path of Tlang, who scored his first goal in Goa colours with a well-taken strike.

Just when it looked like Goa were in the driving seat, BFC pulled one back soon after the water break.

Prancing into the box after beating Seriton with a clever first touch, Wangjam curled his shot at the far corner with a delightful finish to notch up his first goal for BFC.

The Blues had another great chance to draw level right at the end of the first half but were denied by the woodwork. Xisco Hernandez whipped in a delicious cross for Cleiton Silva whose header rattled the crossbar.

Just after the change of ends, Angulo missed a fine opportunity to get his brace. He got past the BFC back line on entering the box and attempted to lob the ball over Gurpreet but missed the target.

BFC lacked the cutting edge in the final third despite trying hard to push for an equaliser.

The Gaurs dominated the closing stages of the contest. They fashioned chances to finish the game but just couldn’t get past Gurpreet, who pulled off some stunning saves.