GOA to request govt to host Nat Games in Nov 21 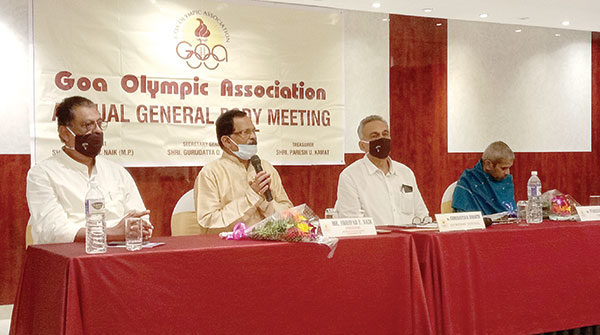 PANJIM: The Goa Olympic Association (GOA) passed a unanimous resolution to request the Government to host National Games in Goa in November 2021.

“We have passed a resolution that the government should endeavour to hold the National Games in November 2021. A committee will be formed which will be headed by the GOA President Shripad Naik and this delegation will personally meet the Chief Minister and give him the memorandum to fast track the work.,” said Goa Olympic General Secretary Gurudatta Bhakta.
Gurudatta added that the delegation would request the Chief Minister to fast track the completion of incomplete infrastructure and to resolve the pending issue.
The 36th National Games, scheduled to be held in Goa, on Thursday were postponed indefinitely due to the coronavirus pandemic. Goa were supposedly to host the Games in October-November this year. The last edition of the National Games was held in 2015 in Kerala.
They were originally scheduled to be held in November 2018 before being rescheduled to April 2019. However,  General Elections caused a further delay.
If Goa delays on the infrastructural projects the state might lose the hosting rights.
“Uttar Pradesh has shown lot of interest in hosting the games and they have even written to Indian OIympic Association and if we mustn’t delay any further and as such we have taken this resolution to approach our CM to look into the pending works. We can’t tend to delay more,” added Bhakta.
It is learnt that though many projects are nearing completion, the swimming pool and squash court are yet to be completed.
GOA also acknowledged 10 athletes from eight disciple and grants of Rs 30,000 each were approved for the year 2021.
Later, the GOA President Shripad Naik felicitated the following: Paresh Kamat (Athletics Association for his contribution as Treasurer of GOA); Chetan Kavlekar (Archery Association, on being appointed as Vice President of Archery Association of India); Sudesh Thakur & Jaywant Hammanavar (for opening an Academy for 15 sports disciplines in Ponda); Sandeep Heble (appointed in Khelo India committee - Goa); Siddheshwar Naik (bronze medal for judo team in Khelo India Games); Caesar Menezes (on his achievement of lifetime achievement award by the Federation in Yachting); Xavie Marques (For sponsoring land for hockey turf in Navelim); Grants of Rs 30,000 each to 10 athletes were also approved for the year 2021.
Related news