Goan lads witness the good and ugly side at Wembley 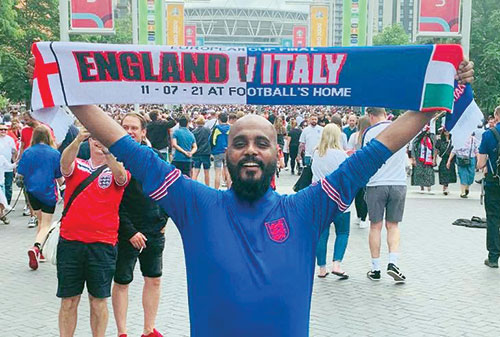 PANJIM: From being spectators at inter-village tournaments to even witnessing the National football league final in their own backyard, Goans, spread to all the four corners of the world, never miss out on being present at a football match.

The passion for The Beautiful Game among them makes it an inseparable bond. The Euro summit clash between England and Italy at Wembley was no different as the extravaganza was also witnessed by Goans lads.

“It was my birthday and it just happened to be my lucky day,” said Ketan Naik who hails from Shirgao, Goa.

“A friend of mine had a spare ticket for the final and was ditched at the 11th hour. As a neutral, I had no time to prepare and rushed to accompany my friend to Wembley,” explained the young chef who lives on the outskirts of London.

“I had applied for a ticket through England’s official supporters group but luck didn’t favour me. However, I didn’t want to miss out on the experience at Wembley Park,” said Levino Pereira who has been supporting The Three Lions since his school days. Pereira hails from Santa Cruz, stays in Heston.

He narrated that things started to reach a boiling point just around kick-off time. “Fights picked up as the fans without tickets wanted access. There were flares fired. Despite deploying cops and security, the lot were outnumbered. We were lucky to get away from Wembley in time and ended up watching the game peacefully in Uxbridge,” Levino explained.

Despite COVID concerns, last month, the UK government increased the capacity at Wembley to “more than 60,000” for the final stage matches and is set to welcome full capacity stadiums in the coming weeks.

“Everything was carried out smoothly. I had my digital pass which was scanned at the entry point. With the pandemic around, the measures and guidelines were the same: temperature check and scanning with the NHS app which tests and traces your surroundings,” Ketan elaborated.

“The crowd especially the English fans were very vociferous. Be it cheering and booing the opposition, it was rollercoaster of emotions. The craze died down only after the penalty shoot-out. It was great experience to be at the Euro final,” concluded Ketan.

The Azzurri’s triumph brought animosity over the English city resulting in the poms taking to the streets.  “The event soon turned into a riot where everyone was running for their lives,” Levino said.

“Fans started to break bottles and fling them at each other. There were kids as little as a year-old in their prams witnessing all the hooliganism. No one was spared as English fans even fought among themselves. It showed the ugly side of The Beautiful Game,” he added.