Hand of Go(l)d arrives in Goa 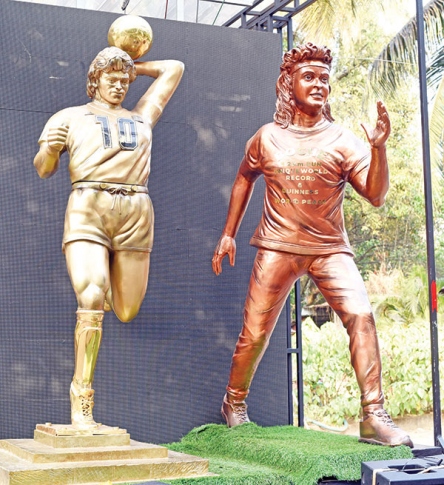 PANJIM: The gold statue depicting the ‘Hand of God’,  a contrversial goal scored by Argentine legend Diego Maradona against England in the 1986 World Cup,  is now in Goa.

An idea by Dr Boby Chemmanur, a jeweller and banker, based in Kerala, has been taken through Karnataka and will now be displayed in the State.

From Goa, it will travel to Pune, then Mumbai. Dr Chemmanur then intends to fly to Qatar and present the statue to local authorities on December 10.

The event which is organized by Boche & Maradona Fans Charitable Trust was initiated by Dr Chemmanur to carry the message of his “soul mate” Maradona that advocates “football addiction against drug addiction” by visiting selected colleges to inspire students.

Maradona's statue will be displayed in front of a  World Cup stadium and then handed over to a museum in Qatar.

Dr Chemmanur said, “Talks are taking place on that score with the stadium authorities. If it does not work out, it will be brought back. The idea of the statue came about when I presented a golden football to Maradona and he had expressed his desire to Boche to have a perfect full-sized golden statue of himself scoring the “Hand of God” goal.

“I decided to fulfill his wish. Sadly, he is no longer with us and I am sure he is with the angels. During our conversations he talked about his addiction to drugs and how he lost everything and suffered.”

The statue, according to Dr Chemmanur,  has been manufactured at a cost of Rs 1 crore.

Maradona, he said, gave up drugs but stuck with alcohol. It was his wish to spread the message through Boche & Maradona Fans Charitable Trust.

As part of the campus campaign, they  will encourage students to take part in the “10 crore goal kicks” event which aims to support Maradona’s message.

Everyone involved will take a firm oath against drug addiction and work together to make India a part of the next World Cup.

Like every football lover in India, the doctor also known as Boche is also waiting for the day when India participates in a FIFA World Cup. When Maradona was informed about this, he promised to provide the services of international coaches in collaboration with AFAFTI (Argentina Football Academy Football Technology Institute) to fulfill Boche's wish. As part of the plan, Boche is planning a project in collaboration with AFAFTI to mould the best footballers in India.