Kerensky dreams to be the ‘Queen’ of ‘Octagon’ 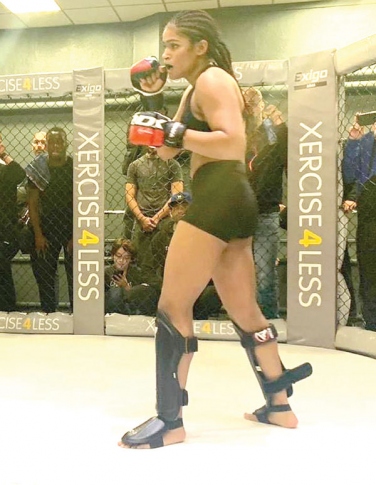 Every girl wishes to be a princess, but for Goa’s Kerensky Fernandes, she has been working hard to be the ‘queen’ of the ‘Octagon’.

Now that’s an unfamiliar term for many but for the mix martial art lovers, that is where they all want to prove their supremacy and for this young Goan girl, this is the place where she wants to conquer.

Aged 22, the Cansaulim born fighter will be making her debut today (November 27) in the MMA in the Olympus Fight Series 2 amateur mixed martial arts fight (115lbs category) against Blackman. This would be probably the first Goan athlete to enter in such a ring - Octagon.

Kerensky has been training for the past three years but her journey began as soon she moved to the UK where she studied sports science, got into weightlifting, proved to be a British weightlifting champion and won the Dublin Championship before making a switch to mixed martial arts.

“I have had one inter-club event in MMA but this is going to be my first official fight,” stated the young fighter who had been in a fight camp for the last six weeks along with the Great Britain Top Team.

But this isn’t the sport we often relate to Goan athletes. And being a girl/woman it's even more surprising to see young and beautiful girls take up such a sport. Whilst other girls and her friends were busy updating their social media feeds, Kerensky was training twice a day wrestling, kickboxing, boxing, Brazilian Jiu Jitsu and was strengthening her core to be ready for this big day.

“The fight will be difficult but I have come a long way. I am prepared for the fight,” she said.

When asked about her introduction to this sport, she stated, “I wanted something more, and that’s when I joined martial arts following my sister who joined it just for her fitness. No one is born a fighter. We have to learn, and practise and develop the skill. So no matter where you are from, this part of it will be the same,” explained Kerensky.

But like many others, Kerensky too didn’t plan her path. It seemed more of a calling.

“The first trial class turned out to be my calling. I started off as a Brazilian jiu jitsu practitioner and did muay thai alongside. I never thought of MMA as a whole. But as I started competing it got me thinking about MMA. The thought of mixing everything together in a fight started exciting me,” expressed the 22-year-old.

“I started watching UFC and it motivated me, the thrill and excitement it gets into me is different. I knew exactly what I wanted to do,” explained Kerensky. “I’m fortunate to have the Great Britain Top Team on my side. That’s where I train to be a professional. And here I am gonna be fighting my first MMA amateur fight today,”

Fighting would never be the first choice of any parent to suggest to their child as a career option. Obviously because of the dangers that come with it. Like any other girl, Kerensky too had initial struggles before taking this sport considering the fact that it’s physical. But for her, she had her sister as her support.

“My elder sister took the responsibility of me and my career when I moved to the UK. She is my pillar of strength. My parents did not understand what this is all about until they attended one of my MMA inter-club fights. Now they know and understand and I have their full support. They take pride in knowing I’m doing what I love and that’s what matters the most”.

They often say ‘do something that makes you stand out and people remember you for’ and this is what drives this young girl into the physical sport. “I think it’s the thirst and drive to do something that no one would normally think of doing is what drives me to do MMA,” stated Kerensky, who never ever grew up thinking one day she would be a MMA fighter. But that’s something she wants to do till the end, at least for now.

Having studied and spent most of her formative years in India, Kerensky did feel the difference of taking up sports in these two different nations.  “If we talk about opportunities, in India we have less opportunities that’s the reason why we have to travel elsewhere. But in Europe it’s more open to things like this. For eg. No parent with a sane mine would push their daughter to go become a professional fighter. The first thought that would pass their mind would be what if my daughter breaks her face or her bones who would marry her?. But I don’t believe that’s the case with European parents,”  stated Kerensky.

When asked about her role model, Kerensky mentioned a series of MMA fighters including Connor Mc Gregor and others, but signed off with a statement. “It’s too early to even make this statement but I am confident I will be there in their shoes one day making my contribution to the sport.” Hope to see her fight the UFC soon!