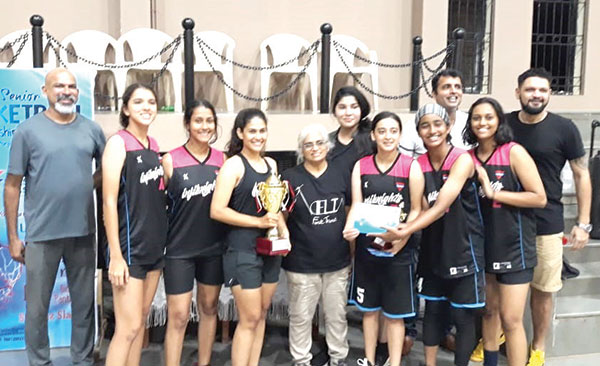 PANJIM: In a thrilling final of the State Basketball Championship, Lourdes Basketball Club clearly showed themselves a notch above the other defeating KJs by 19-point margin to establish themselves as the new heroes of Basketball in Goa.

In a packed indoor hall at Don Bosco Oratory Hall Panjim, with most betting themselves on the youthful vigour and speed of Lourdes over the experience of KJs, it was clear from the start, that the game was in their favour.

The young fiery cagers of LBC kept the lead widening it at each quarter, with a packed defence, not giving space to KJs to penetrate to the rim. The surprise turner, Jason Nathan (18) scored the highest for LBC, followed by Jeshua Pinto (15) and Bavish Bijoy (14).

It was clearly the captain Jeshua’s inspiration that got him the MVP of the event.

In the women’s category, it was a close neck-to-neck fight between Sonics and YMCA Infiknights. Sonics had a slender one point lead in the first quarter, while the Infiknights managed to gain the upper hand in the second and third quarter.

With scores level in the last 20 seconds to full time, it was the basket of Sarah Hussain (10) that swung the odds in Infiknights favour to be declared as Basketball champs. Amisha Lotlikar (18) was declared the MVP of the match. Shimei Nathan (12) played well for Sonics.