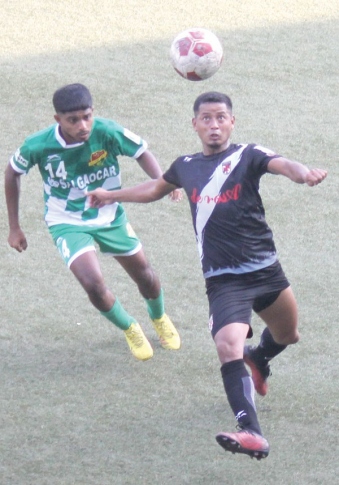 If Vasco colts had four close chances at the other end Salgaocar unit had two in the first half an hour of the match.

A deadly cross by Vasco's U20 Prajwal Ghadi was timely headed for a corner by defender Krishnanath Shirodkar before Cavin Lobo could connect it.

Nigerian Odili Chidi displayed his skills by chesting the ball off a cross by U20 Jesvan Fernandes but his poor volley travelled wide.

Minutes later, after a fumble from inside the penalty box by Savlon Fernandes a fierce shot by Cavin Lobo hit the goal post and rebounded into play.

Green Brigade too had their chances but Valentinho Nazareth after snatching the ball from the defender Khrawkupar Tamu darted inside the 18-yard box only to find Vasco keeper Debasish Ghosal leave his charge to thwart him.

A stiff grounder from left flank by U20 Beckham Dias saw keeper Debasish dive and push the ball for a corner.

Suddenly goals started pouring in the last fifteen minutes of the first session.

In the 35th minute Cavin Lobo gave a perfect pass to Odili Chidi whose power packed left footer crashed into the back of the net to give his side the lead.

In the very next minute Vasco's defender Khrawkupar leapt high above Salgaocar defenders and nodded the ball into the goal off Cavin Lobo corner 2-0.

However, a minute into the added time and Salgaocar managed to reduce the margin with Mark Carvalho heading the ball into the goal off Umang Gaikwad cross at the first post 2-1.

Green Brigade Valentinho almost scored the equaliser in the very next minute but his thundering right footer zoomed just past the crossbar.

Just six minutes into the second session and Salgaocar netted the equaliser with Mark Carvalho netting his brace scoring from just inside the 18 yard box 2-2.

Salgaocar should have taken the lead in the 68th minute but Vasco keeper Debasish dived at the feet of Mark Carvalho off a low cross by substitute Fhezer Gomes.

At the other end, Vasco's Odili Chidi shot was blocked by Salgaocar's keeper Vishal Sunar and the ball rolled to Chirag Mardolkar who headed into the keeper's gloves.

In the 83rd minute Mark Carvalho was at the correct place to connect Siddharth Kundaikar free kick into the goal with a neat header 3-2.