Pall of gloom descends on Curtorim 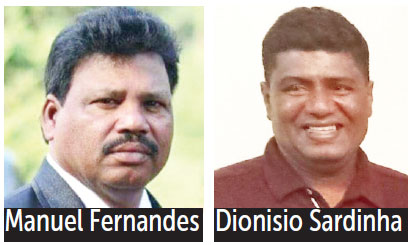 PANJIM: The COVID-19 pandemic has hit everyone hard including the football fraternity in Goa. On Monday, a pall of gloom descended on Curtorim village and entire football fraternity when the news of the passing away of the two of the most loved personalities and football administrators Manuel Fernandes (Shanu) and Dionisio Edward Sardinha broke out as the duo lost the battle against the dreaded virus.

While Manuel Fernandes’ breathed his last in the morning, his good friend and colleague Dionisio died in the afternoon where both were being treated at Margao.

Dionisio was the current president of Curtorim Gymkhana. Dionisio was 49 and Manuel 57 years.

GFA President Churchill Alemao condoling the death stated, “Dionisio was a football super-enthusiast, involved in football promotion in the village, having earlier served as the General Secretary of Wilred Leisure Club also of Curtorim. He had a knack of picking up potential talent from the village and moulding them into skilled footballers,” Churchill said.

Manuel Fernandes, popularly known as Shanu, was the former General Secretary of Curtorim Gymkhana. “Manuel was known for his devotion and selfless services for the upliftment of football in Curtorim. It is sad that Goa lost two stalwarts of football to the dreaded Covid-19, for whom football development was uppermost in their minds and as such worked tirelessly for the upliftment of the game, added Churchill.

GFA General Secretary Jovito Lopes stated, “This pandemic has affected us the most, taking away precious life. Football has lost another two personalities who were known across the state for their works. It's a huge loss to the village of Curtorim and Goa. My condolences to the bereaved families.”

Anthony Barbosa, Executive Member of GFA and Vice President of Youth Club of Manora stated, “Dionisio was a true sports lover who always supported sports activities in his Curtorim and throughout Goa specially football.Goa will miss a young and energetic sports lover. May his soul rest in peace.”

“Dionisio will be always remembered for his commitment to social causes and sports. He was the instrumental person in lifting up Curtorim Gymkhana and Wilred Leisure Sports Club,” stated GFA Vice President South Anthony Pango.

“Can’t believe that Dionisio is no longer with us, Apart from being a close family friend, he was an able football organiser and never let me down during my tenure as the General Secretary whenever called upon to organise GFA matches,” stated Welvin Menezes, GFA Executive Member and former General Secretary.

Arnaldo Costa, former member of GFA Executive Committee, who hails from Curtorim, also condoled the death of the two outstanding organisers from the village who were known for their total love for the development of football in Curtorim.