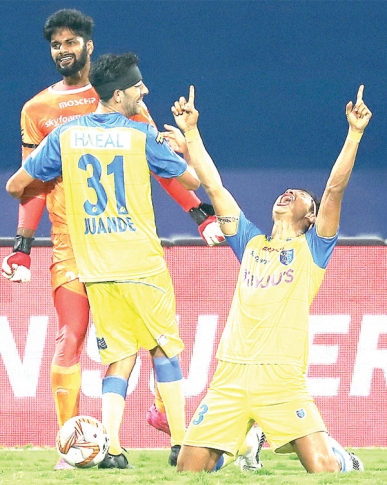 An acrobatic first-half effort from Cleiton Silva (24') handed Bengaluru the lead before substitute Lalthathanga netted an equaliser (73'). Rahul scored a brilliant individual effort in injury time. Bengaluru promptly punished them for not making the most of their opportunities. Rahul Bheke's long throw from the right was not properly dealt with by the Kerala defence and it fell to Cleiton, whose acrobatic volley gave Kerala keeper Albino Gomes no chance.

Bengaluru keeper Gurpreet Singh  went down after using his body to block a powerful Gary Hooper shot from close range. With Gurpreet still on the ground, Sandeep fired the ball back into the box. After a melee, the ball finally broke free for Lalthathanga, who netted the equaliser.

There was still time for a late winner, though. After Bengaluru struck the post, a rapid counter-attack from the men in yellow saw Rahul sprint into the Bengaluru half. Instead of trying to find a teammate, he took the shot himself scored past Gurpreet for a dramatic winner.