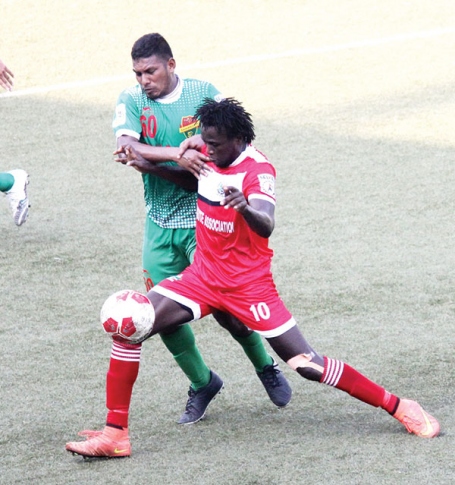 When the match was called off, the teams were locked goalless.

Salgaocar unit started earnestly and had two threatening attempts at the rival goal.

In the fifth minute, striker Steflon D'Costa dribbled past a host of defenders and drilled a hot blooded shot which was blocked by Calangute's keeper Paramveer Singh and the ball rolled to Fhezer Gomes whose strike kissed the upright and went out.

Just three minutes later, a long ball by Salgaocar's medio and skipper Saeesh Halarnkar found Selwyn Miranda who got the better of defender Fulganco Cardozo and latched a left footer which rebounded off the crossbar.

After almost twenty minutes of midfield tussle, Salgaocar once again came close in opening their account in the 38th minute where Stephen Alvares set up Steflon D'Costa on the right flank who darted inside the penalty box, but saw his strike miss the target narrowly. 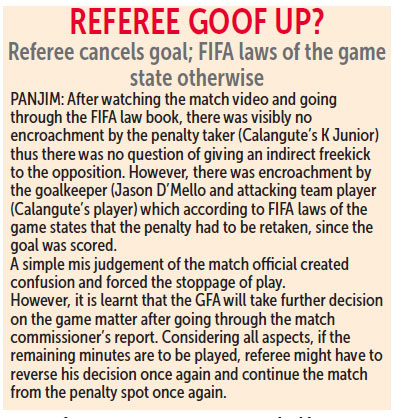 Just five minutes into the second session, Calangute's U-20 Chaitan Dabholkar made a swift run from the right flank and tried to find Siddhant Shirodkar inside the 6-yard box, but Salgaocar's defender Saurabh Patil intercepted the cross for a corner.

At the other end, a back pass by Calangute's Rohan Kamble was this time intercepted by Salgaocar's Fhezer Gomes but his strike from outside the penalty box went skywards.

However, referee Mario overruled the goal for a retake as Calangute's Akash had entered the box while the penalty-kick was being taken. Salgaocar's coach Levino Pereira and the players protested that a free-kick should be awarded, the referee consulted his assistant and changed his earlier decision for a free-kick.

Now this time the decision of the referee did not go well for Calangute players and they protested and the match was held up for 50 minutes which was subsequently called off by the Match Commisioner Egidio Da Costa stating that decision would be given by GFA.