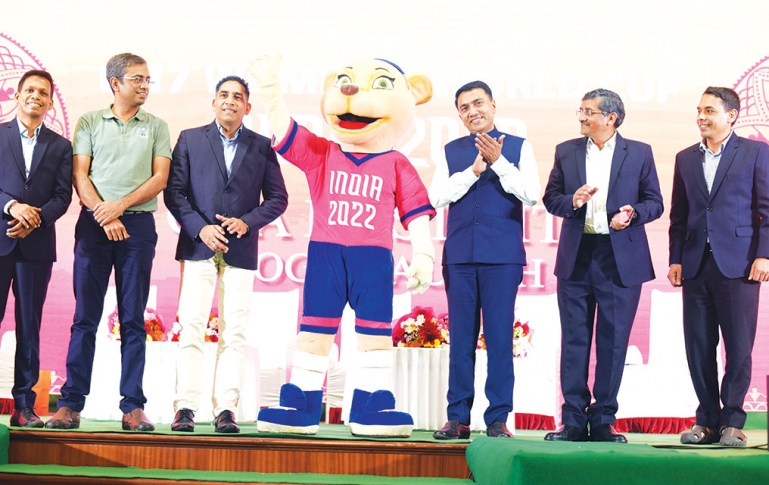 PANJIM: Depicting a young woman footballer, the striking host city logo for the state which hosts much of the FIFA U-17 Women’s World Cup India 2022, was unveiled on Wednesday.

Chief Minister of Goa, Pramod Sawant in the presence of the Minister for Sports & Youth Affairs Govind Gaude, launched the logo at the Durbar hall located in the Raj Bhavan complex.

The CM was nothing short of delighted and said: “Everyone in Goa, be it kids, youngsters or elders, everyone plays football. I personally would like to thank Anurag Thakur (Union Sports Minister) for giving us the opportunity to host the tournament in Goa.

“We aim to make the FIFA U-17 Women's World Cup bigger and better so that the players who play in the rural and village areas get an opportunity to play at the National and International level.

“I want to thank the Sports Minister and Local Organising Committee for carrying out the host city logo launch of Goa for the FIFA U-17 Women's World Cup at such a grand level. We will ensure that the tournament will be the highlight and ensure everyone plays their roles to make the tournament a success.”

The event seems to have inspired a spate of positive initiatives in Goa and Sawant revealed that maintenance of football pitches would now be the responsibility of the club as well as the state authorities with both parties having to share responsibility.

Gaude said, “The FIFA U-17 Women's World Cup will be the biggest carnival of football in India. We will ensure the tournament will be one of the best tournaments hosted in Goa.

“We have developed a fantastic sports infrastructure in Goa in record time. We will make sure that this tournament creates a huge impact as there has always been a great culture for football in Goa.”

The FIFA U-17 Women’s World Cup India 2022, scheduled to be held from October 11 to 30 across Bhubaneswar (Odisha), Margao (Goa) and Navi Mumbai (Maharashtra), will be the first FIFA women’s competition to be held in India.

It puts Goa on the verge of becoming one among only two states in India to host two FIFA tournaments, the other being Maharashtra.