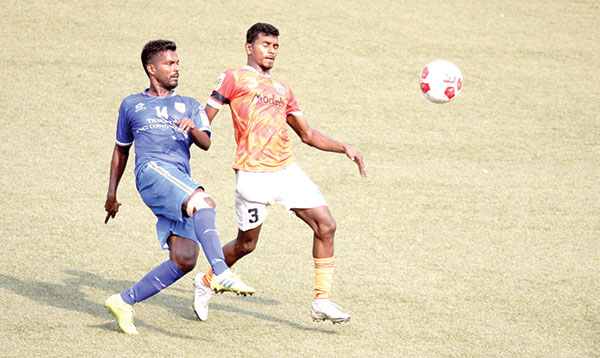 After Wednesday's drawn encounter, Sporting stand with 20 points, while Dempo have 18 points.

In an action packed encounter, both the teams were all focused to return home with a win, thus aiming for the league title.

Uttam Rai netted a hat-trick with Desmon Pereira adding his name to the scorers list for Dempo in the first half while for Sporting, Gourav Kankonkar and Kunal Kundaikar scored for Sporting. Joel Colaco and Gaurav Kankonkar pumped in two more on crossing ends for Sporting.

Five minutes into the match, Flaming Oranje forged ahead. A short corner well executed by Myron Fernandes saw Akeraj Martin's flick the ball to Gourav Kankonkar who nodded the ball home to give his side the lead.

It did not take long for Golden Eagles to level terms when in the eighth minute a long floater by skipper Shallum Pires was controlled and finished by Uttam Rai with a superb placement.

Just two minutes later and Dempo further increased their lead. A flick by Pedro Gonsalves just inside the 18-yard box had a touch to Sporting's Gautam Dias hand prompting referee Mario Pereira to point to the dreaded spot. Uttam Rai stepped forward and scored to make it 2-1.

At the other end, Flaming Oranje had two chances to get the equaliser but Alton Vaz’s header rebounded off the goal post while keeper Melroy thwarted Rohit Totad in one-to-one situation.

While Sporting failed to score Dempo pumped in two more goals. A neat cross by Uttam Rai at the far post saw unmarked Desmon Pereira head the ball into the goal to make it 3-1.

An intelligent low cross by U-20 Richard Cardozo got a touch to Desmon and the ball travelled to Uttam Rai who tapped it into the empty goal to make it 4-1.

An intelligent move by Sporting coach Francisco Vaz of getting Philip Odogwu from the bench paid dividends where in the 31st minute he was brought down by Shallum Pires and the referee pointed to the dreaded spot. Kunal Kundaikar made no mistake to make it 4-2.

On crossing ends, Flaming Oranje carried on their onslaught where in the very first minute Philp Odogwu’s shot at the first post was blocked by keeper Melroy who once again saved Alton Vaz header off a corner.

At one hour mark, Dempo received a major jolt with the sending off Kirtikesh Gadekar for second booking offense.

Down by a men, Golden Eagles found it difficult to retain their two goals lead.

A direct free-kick by Gourav in the 61st minute was blocked by keeper Melroy to find Joel Colaco who was lurking nearby tap the ball into the goal to make it 4-3.

Seven minutes later, Sporting's Gourav Kankonkar scored a gem of a goal where his thundering 25-yard shot crashed into the far corner of the goal, 4-4 to send his teammates and supporters into raptures.

Philip should have added icing to the cake but failed to score in the dying minutes of the match for Sporting.