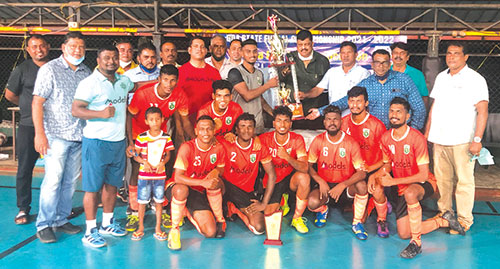 In a closely fought encounter, it was an end to end battle from the word go. Ambelim's Suraj and Fraser did exceptionally well to keep away the Sporting Clube de Goa danger in the majority of the first half. A defensive play and approach from Ambelim made it difficult for Sporting to find the gaps in the Ambelim area. The scores were even at the break.

However, it was a transformed Sporting Clube de Goa side in the second session who didn't waste time in taking the lead in the first minute of the second half. Llyod Cardozo scored the first and then added two more within the next five minutes to complete the treble. Marcus Mascarenhas scripted his name on the score-sheet with yet another brace before Llyod Cardozo scored two more to complete his milestone. Alton Vaz and Clive Miranda added two more goals for the winning side. Lyndon Cardozo managed to pull a goal back for the losing team.

During his speech, Churchill stated, "Discipline is must in any sports and without discipline a player cannot grow. Both teams played well but Sporting Clube had the edge in the second half. I congratulate Sporting Clube for winning the championship and wish them good luck for the Nationals.

Churchill also added that, "Our players need to train more in futsal as this is a different sport altogether. Our players need to be more confident in dribbling opponents etc. Neymar was a product of futsal and we know how good he has been so far. I would be happy If we see more of our Goan players to excel in this sport and then play some finest football." concluded Churchill.