MAPUSA: Last season Vasco Sports Club finished ninth in the 12-team Goa Professional League. The teams struggled to get desired results but five wins and five draws from 22 games was enough to see them stay above the relegation zone. But luckily there was no relegation as the season was cut short due to the COVID Pandemic.

However, this season, Vasco SC had the busiest pre-season. They started the training in last week of December, conducted trials in neighbouring states and managed to sign some talented youngsters.

But among them, the club also managed to seal the deal with former Indian internationals – Joaquim Abranches and Francis Fernandes.

Yes, you read it write. Two of the seasoned campaigners will sport the Port Towners jersey for the upcoming Goa Professional League.

Abranches might have been nearing his end of footballing career, but the former FC Goa player’s form in Goa league has been terrific in last couple of seasons.

“I am happy that we managed to retain most of our players from the last season and have strengthened certain areas by signing Joaquim Abranches from Dempo SC and Francis Fernandes from Chennaiyin FC,” stated Vasco SC coach Micky Fernandes. With Suraj Mondal being retained, the Vasco strike force would probably be one to watch this season.

Vasco had their pre-season at Varca and Fatrade beach before moving to Verna football groun.

“This year we have got a mixture of youth and added a lot of experience and being a single leg there is no chances of making mistakes but he has full faith in the players that they will give their best,” the coach concluded.

The club with glorious history is now on a journey to add the Goa Professional League title in their trophy cabinet, having won major trophies with the likes of  Kerala Trophy, Stafford Cup, Bandodkar Gold Trophy, Chakola Gold Trophy and Sait-Nagjee Trophy earlier. 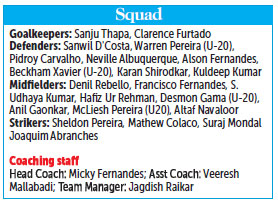 On home soil, the club won the Goa Football Association league title on six different occasions starting in 1954 until 1969 and the club is still participating in the state's top League competition never once having been demoted.

The outstanding and renowned “ABCD” comprising Andrew, Bernard, Catao and Dominic saw the opponents struggle when all the four took the field.

Further speaking to Club Director Ravesh Narvekar, "It's my third year with the club and we have managed to get in sponsors and partners even after pandemic situation everywhere. We are also trying for few more sponsors so that we can participate in the Second Division League for this season, if not then next season."

"Talking about the team, coach has retained most of the players from the last season and have also signed few senior players like Joaquim Abranches and Francis Fernandes. This season, we will be looking to win as much matches as possible and finish high."

Micky Fernandes will be assisted by Veeresh Mallabadi and team manager - Jagdish Raikar to bring in the best from his team.