With a plan in mind, COACH JUAn eyes first win for FC Goa 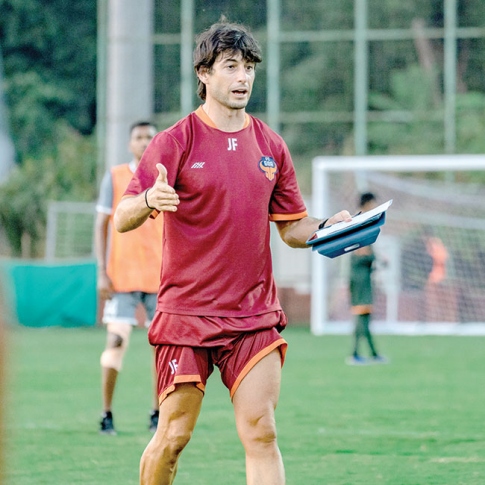 PANJIM: It isn’t normal for the fans to expect FC Goa drop points and it’s not their fault.

The Gaurs enjoyed some excellent football under former coach Sergio Lobera in the past three seasons that has raised the expectations of the team.

Juan Ferrando, much aware of the situation, did continue with the attacking philosophy and many would agree that the Spaniard even bettered the performance in terms of the game plan, than what it was last season.

Despite dominating both of their league games, they came from behind to hold Bengaluru FC 2-2 and then lost against Mumbai City in the stopped page, thanks to the penalty which helped the former boss Lobera earn his first win. The Gaurs managed to get just 1 point from two matches, probably their worst start since 2016, when Zico played his final season at the club.

“Our mentality all the time is to get three points. Of course, I'm not so happy because against Bengaluru. I think we lost three points because we had more opportunities to win the game. Against Mumbai, it was difficult after Redeem (Tlang) received the (red) card and in the end, we lost the game because of the penalty,” expressed Ferrando.

"It was very difficult for everybody but now this is the past. Now our focus is on NorthEast and to get the three points (against them)," said Ferrando.

However, Ferrando now faces another stern challenge from NorthEast United today at Fatorda Stadium, who are currently enjoying their dream run in the league. They have been unbeaten in the league so far, and wouldn’t be a side who would let Goa walk away with three points.

“Every game depends on a lot of details. Our philosophy is the same - to build the game and create space for positional attack. Sometimes, it depends on the moments, the minute of the game or substitutions. I'm very happy about the way the players are working and it's more or the less the same for the opponents. They (NorthEast) have very good players and are very aggressive in one against one. I think we will have a very good game on Monday."

Ferrando sounded confident during the pre-match conference to take on the Highlanders as the gaffer seemed ready with a plan to face the visitors.  “We have a plan because it is important. The last two games they (NorthEast) were aggressive in attack. They have good wingers and they fight for 90 minutes so its important to take control of the game.”

Meanwhile, NorthEast Untied coach Gerard Gus said his side have been executing what they have been putting into practice during the training sessions. “We are working hard to be competitive in every single game. I am not surprised the way we played as that’s the way we train. The games are the results of the passion and hard work they (players) put in training session. I am not surprised in seeing them perform in the game,” he said.

“The most important is tomorrow’s game which will be a massive challenge for us and we need to understand that at the end of the day. FC Goa won the regular season last year and we shouldn’t forget that."

“"I think they (FC Goa) have the pressure to win. They have huge squad in terms of quality and talent. They play good football and play possession play. I believe they need to get a lot from the game and we know that. And the league is played in Goa, definitely we expect them going for the game." 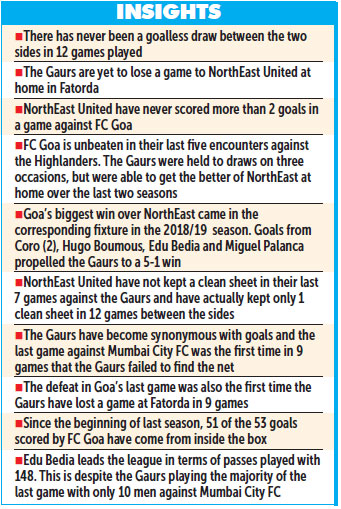