Yet another frustrating draw for Gaurs 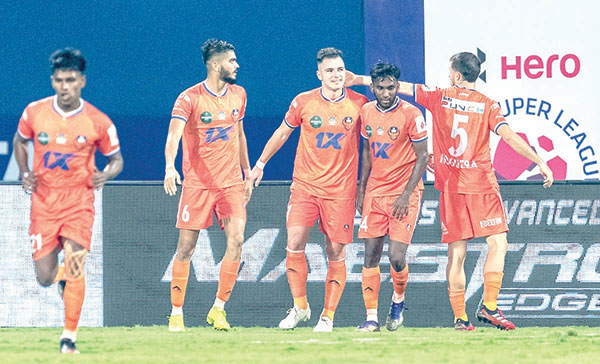 PANJIM: On Friday evening, it was yet another frustrating draw for FC Goa! Derrick Pereira’s Gaurs were excellent throughout the second half, but the goal eluded them. The Gaurs were held to a 1-1 draw against NorthEast United in the Indian Super League at Athletic Stadium, Bambolim.

The Gaurs were dealt with by Hernan Santana’s second minute free kick strike. Airan Cabrera put FC Goa back in the game just before the breather to set up an intense second half, which saw plenty of raids from the Gaurs, but the goal eluded them.

With both sides sitting in the bottom half of the table, they were desperate for the three points. A match which witnessed Indian coaches was eventful with goals, intense battle, plenty of missed chances and a goal ruled out at both ends.

NorthEast United had a dream start where they were put ahead in the second minute by Hernan Santana from a set-piece. The direct free kick gave no chance for the diving keeper as the ball hit the post and went in. For FC Goa, this was their 11th goal conceded from a set-piece, a stat which they wouldn’t be proud of.

NorthEAst United should have been up by two goals but Deshron Brown, who did everything right getting past the defenders and entering the area, fired his shot wide from close.

FC Goa have been totally dependent on Jorge Ortiz’s creativity in the midfield. The Spaniard’s presence in the squad has had a huge influence on the side. Getting the ball from the left, Jorge did well to get past Provat Lakra, only to see his shot saved by NorthEast United keeper Mirshad Michu.

NorthEast United’s Deshron Brown did trouble the Guard backline but his final touch let him down.  Meanwhile FC Goa keeper Dheeraj Singh pulled off a brilliant save to deny Suhair V.

At the half hour mark, FC Goa took control of the game where they were seen knocking on the NorthEast goal in search of the equaliser which finally came in the 39th minute. The Gaurs too scored from a flag kick where Albert Noguera’s corner kick was headed in by Airan Cabrera.

The second half was even more exciting. Though the teams were showing urgency, FC Goa were relentless, having plenty of chances created. Jesuraj Alexandre forced a stunning save from Mirshad Muchu.

FC Goa’s Jorge was exceptionally good on a night where despite doing everything right, he couldn’t get the back of the net.

In the 79th minute, FC Goa nearly scored the match-winner, only to be ruled out by the referee for an earlier foul on the goalkeeper Mirshad. Though it didn’t seem to be a correct call. Then NorthEast United also had the ball at the back of the net, which was eventually ruled out too for a foul on a keeper.

NorthEast United were bright in the first half, but their poor approach in front of the goal let them down. For Gaurs, there was no denying the second half belonged to them, but they just couldn’t get the goal they were looking for.