Goa has a cultural side to August 15

August 15 turns out to be the busiest day of the calendar year, with cultural programmes being organised throughout the state. Combining the feast of Our Lady of Assumption and Independence Day with the flavours of the piping hot pattoleos, Soccorro in Bardez and Carmona in Salcete are two villages which revive traditions through their festivities 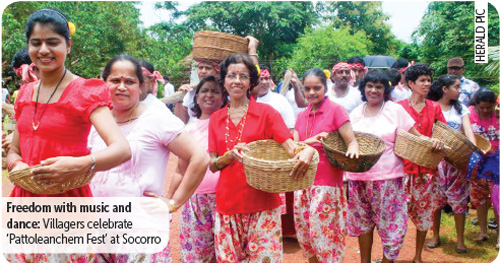 Just after returning home from the feast mass in the morning, it is time to coat freshly cut turmeric leaves with a layer of rice paste, grated coconut and jiggery,before steaming them in a konfro. But the feast celebrations don’t end there. With more activities happening, one can enjoy patriotism through song and dance and go back in time with traditional music, songs and games. The villages of Soccorro and Carmona celebrating their annual Community days on August 15, and they want invite all of Goa to join in.

This year, the Soccorro Socio -Art and Cultural Association, Porvorim will be celebrating its 4th annual ‘Pattoleanchem Fest.’The festival will be held at the Socorro church grounds with a mass followed by a procession of Our Lady of Assumption with a brass band at 9am, followed by an Independence Day programme at 10.30am and the commencement of the ‘Pattoleanchem Fest’at 11am. Theallotted theme is‘Music’ and Adv John Fernandes and his 30 member troupe, comprising of Adivasi Christians from Quepem will perform traditional dances like Intruz, Dallo,Fuggdi etc. “These dances are inspired by their hard working lifestyle. They will be performing eight dances including ‘Ambrapikoti’ and ‘Sopeardada,” says Marius Fernandes, who initiated the traditional festival culture in Socorro. There will be six groups consisting of 40 members each, performing traditional dances and singing songs composed by the villagers themselves. The lunch buffet will comprise of dishes like rice, prawn curry, melgor and Goan mango pickle while sweets will include sannas, pudde, patoieo and vonn which will be catered for nearly a thousand people attending the feast. As the festival has no sponsors or chief guests, it encourages new initiatives. Rohir Naik of Golden Goa Radio app will be showcasing his app to the audience and they will simultaneously be able to listen to ‘Tarvoti’, a song by Minguel Rod. This will be the fourth festival of the year in the village, after ‘Cajuchem Fest’ ‘Ambeachem Fest’ and ‘Ponsachem Fest’,with all expenses for the festivals being contributed by the villagers. Vera Pereira was encouraged to compose songs in the past for these festivals, and has continued in fine form with a song for ‘Pattoleanchem Fest’. “‘Goenkar mogall moipaxi, koslea kamank ami huxari, ami utton fantiari, devak korun rozari, amchea vavrak lagta, ravona fatti’. These are few of my lines. I used to write poems for the church bulletin and Fr Santan encouraged me to get trained at the Tiatr Academy of Goa, which built my confidence in composing songs,” says Vera. In Salcete, the village of Carmona will be celebrating its third edition of Carmona Ekvottacho Dis, a cultural festival that celebrates the feast of Assumption of Our Lady into heaven, Independence Day and the Parish Community Day. Fr Benny D’Costa has composed the theme song, ‘Ola Ole’ which will be performed with a dance by young talent from the village. “We have a total of 8000 parish members, consisting of 24 Somudais which are divided into seven groups for this celebration. Each group is given a name based on Mother Mary, and they have their own colours and flags. At approximately 2.30pm, all the parishioners will gather in their respective wards and march to the church grounds for the festivity. It is an amazing sight to behold,” says Fr Benny, Assistant Parish Priest of Our Lady of Succour, Carmona. The day will begin with the feast mass at 9.30am, followed by games like volleyball and football tie-breaker,before the residents of the villager head home for the grand feast lunch. After marching to the church grounds, the evening games will begin after releasing helium balloons of seven different colours representing each group, followed by a short prayer, song and welcome dance. “There will be three performances before the games, ‘Carmona Ekvottacho Dis’, ‘Ave Maria’ in honour of Mother Mary and ‘Jai Ho’ as a tribute to Independence Day. The traditional games that will be played are Mittani, Lomeani, Longdi, Tablam, Godde and Parrani. I used to play these games as a kid and it is good to see the excitement on the faces of children when they are introduced to them now,” adds Fr Benny. The games will continue till sundown and one can enjoy the hot patolleos, dodol and pudde served at the venue.
Related news