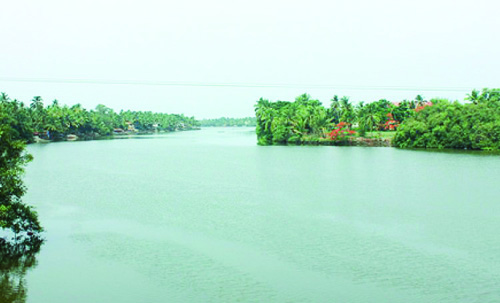 Xelvona, Assolda villages in Quepem taluka, in South Goa are peaceful and enchanting as they lie in the bosom of the historical River Kushawati on the northern and western side. On eastern and southern side are lovely hills and hillocks with vast low-lying paddy fields and wetlands and khazan lands. Lakes like Kore Tollem, Kaje Tollem, Xelvona Tollem and Cottombi Tollem lie at the extreme end of the southern side of Assolda. The forest areas are Bhotta Ran, Nonkula Ran, Kormgalli Ran, Bhonkulli Ran and Bondgalli Ran. These villages were once rich in cashew trees, mango trees, chunna, charam, kanttas, jackfruit and other precious wood trees which are becoming less and less.
Today, social forestry and command areas of Selaulim dam project have been destroyed and today lie in shambles. The ghost of Nava-Dhatu Udhyod Ltd in the year 1991 destroyed the forest areas and other low-lying agricultural lands. A distillery and brewery setup by destroying the eco-sensitive areas on banks of river Kushawati  leads to highly putrefying exhaust gas and smell which is unbearable especially in the late evening and a life-threatening menace to local residents.
The villages of Xelvona-Assolda have been treacherously sold for setting up a polluting “rail freight terminal” for handling multi-cargo system like coal, cement, fertilizer, roro, iron ore and others which are to be interlinked with a construction of jetty on River Zuari and River Kushawati for water transport of the cargo.
The project will occupy an area of 2,63,000 sq m. The total area of Assolda-Xelvon is about 733 hectares. This project is proposed at an estimated cost of Rs 356 core. In the Environment Clearance certificate granted by Goa State Environment Impact Assessment Authority dated Dec 16, 2015 it is seen that this project has been screened and appraised under “8(a)-B2 category” which is not correct but misleading. This project will not only pollute and destroy Xelvona, Assolda villages but also the neighbouring villages of Guirdolim, Chandor, Curchorem, Paroda, Xeldem and others as this project will utilize coal, iron ore, fertilizer, cement, roro. Coal sludge and coal dust will endanger the surface of the land, air, water, vegetation, animal and plant life in and around these villages.
Historically, coal dealing is a dangerous activity. Studies conducted by WHO in 2008 shows particulate matter in atmosphere estimates shortening 10,00,000 lives annually. Worldwide use of coal damages human and animal lives. This project is planned to handle and operate 5.12 million tonnes per annum at the proposed site in these villages which will generate carbon dioxide, nitrogen oxide, sulfur dioxide and heavy particulate matter in the atmosphere which will cause lung diseases and other human ailments.
The proposed jetty on the confluence of Rivers Zuari and Kushawati will cause tremendous loss of fields, khazan lands, wet lands and a large number of coconut trees will be cut down. The rivers will also be polluted with sewage and toxic matter. Underground water level will also be polluted and there will be an influx of migrant workers which is an additional burden on an already burdened land, water and electricity. It will also give rise to slum areas.
The leveling of the land up to the level of railway line for developing the rail freight terminal and jetty will require lot of land filling and cutting of the area. It involves filling of wetlands, paddy fields, low-lying lands and will destroy the topography of Assolda and Xelvona. The activity by the trucks (over 199 trucks) will cause dust pollution. The construction of a belt conveyer in the area will cause unbearable noise pollution.
The state of art bulk handling facility will be provided for handling of coal, iron ore and other minerals from the proposed jetty through a corridor and this is expected to ease the load on Mormugao (Vasco). This means the authorities in question want to dump and create pollution in Assolda and Xelvona. It is also clear from the Environmental Clearance Certificate granted that widening of the access road is also done at the request of the project proponent. And it is clear from the email compliance dated Nov 27, 2015 informing the government had already acquired land for road widening. Was not our local MLA aware of this?
Dear villagers of Assolda, Xelvona and Curchorem, Chandor, Xeldem, Paroda and Guirdolim. Do you want this ghost project to be set up in Assolda and Xelvona and turn these villages into wasting diseased land and gas chamber? The cruel irony is that the rail freight terminal and inter-linking jetty is not for the benefit of the common man or employment of the villagers.
(This writer is a resident of these villages for the last 63 years.)

More Stories from Voice Of Opinion