In an international collaboration between Portugal and Goa, 400 students from underprivileged backgrounds have come out with a book, titled, ‘Histórias Daqui e Dali’, which translates into ‘Stories from Here and Beyond’. The book is authored in four languages and includes stories and illustrations penned by school students on the subject of water pollution 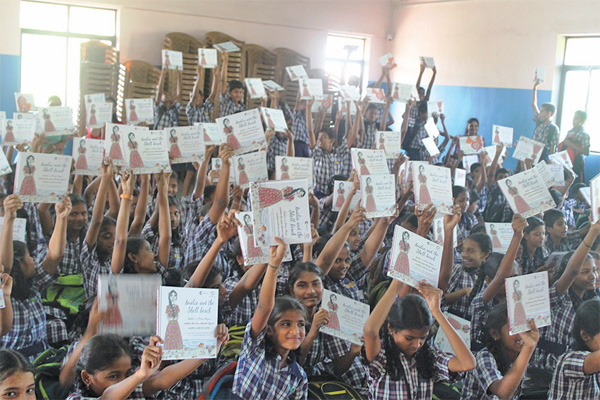 Not too long ago, before the onset of social media, a simple but effective way of connecting with strangers was by becoming pen-pals. Amid the myriad connections made, there were a number of pen-pal initiatives between students studying Portuguese, whether in Goa, Portugal or lusophone countries such as Mozambique and Macau, which were fascinating for the students to say the least.

Recently, there has been another kind of exchange, not between just two students, but 400 students, 200 each from Goa and Portugal and this international collaboration has set a commendable precedent, taking the cultural learnings between the two countries to another level.

‘Stories From Here and Beyond’ is a project conducted by Communicare Trust in Goa and Cabeçudos in Portugal, where students from Auxillium School Goa, India and Escola Básica 2.3 Maria Alberta Menéres in Sintra, Portugal were challenged to write stories on the theme of water pollution and illustrate them after exchanging the stories.

The students from both the schools come from underprivileged backgrounds. The book offers the reader a peak into the thoughts and aspirations of these children, between 10 to 12 years of age, and their views on water pollution.

Students from both schools were asked to write a story on the subject of water pollution. The schools exchanged stories, followed by drawing up of illustrations for the stories by the students. The students also created two animated short films based on both stories.

The project also involved artists and other resource people from both countries, thus having an impact that was not confined to just these schools.

“I am an illustrator and I work on a lot of narrative commissions; I love illustrating for children. In this case, getting to work with the children on a picture book, guiding them to come up with their own visuals and compositions for stories written by other children, and listening to the wild ideas they came up with was the most rewarding experience,” says Danica Da Silva Pereira.

What has been most impressive about the book is the quality of the work involved and the eye-catching artwork and the messages. It is also remarkable that the project got so many people to start a conversation on such a pressing, unattended issue. Moreover, in order to be accessible to a larger number of children, the book is authored in four languages - English, Portuguese, Konkani and Hindi.

The idea of the book came through Communicare Trust that initiated the collaboration between schools in the two countries. Nalini Elvino de Sousa, Manager, Communicare Trust explains, “This is just the beginning; we plan to take this project to more countries. We know that students learn a lot more about different cultures and traditions through idea-sharing based on simple themes that are global.”

Sister Celine says, “The collaboration between the two schools from two different countries to produce this book was something we have never done before.” There was also a ceremony at the institute, which was filled with cheer and laughter as 200 students of Auxilium School, Caranzalem received copies of the book.

“Learn every day. I encourage the students to learn from the schools, the teachers and other students. This also gives you the opportunity to learn about other cultures from a different country,” said Franscisco Duarte Azavedo, Consul General of Portugal in Goa, who was present at the ceremony.

Balachandran Amonkar, Deputy Director of Education, who was also present, called it a great opportunity for the students. He added that their families would be proud. He was also hopeful that such feats could help reinvigorate the reading habit among children.

‘Histórias Daqui e Dali’ will be launched a month later in Portugal, on May 14, 2018, in the presence of Ambassador of India in Portugal K Nandini Singla and UNESCO. The book has been supported by Dempo Group of Industries, the Ministry of Culture in Portugal, Portuguese based companies Águas de Portugal and Resiquimica. The book has the seal of UNESCO.

Shrinivas Dempo, MD, Dempo Group of Industries, states, “Having played a small part in the ‘Stories From Here And Beyond’, I am excited and pleased that the Goan-Portuguese educational project for school children has come alive with the book that has been written and illustrated so beautifully. Congratulations to to everyone involved and this is an exquisite book and well-meaning lessons on water pollution!”