THE EARTHY FESTIVAL OF CHIKAL KALO 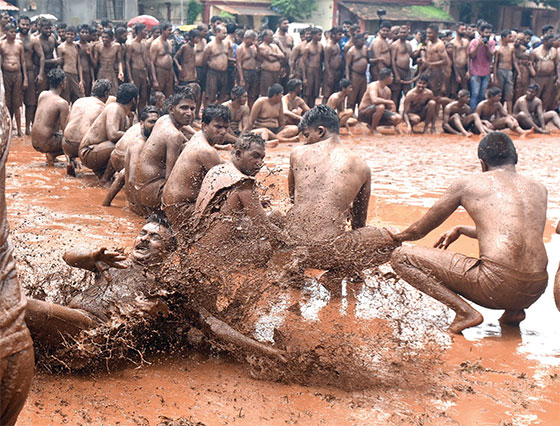 It is found all over the world, especially in agricultural belts. Large fields full of men smearing mud on others, watched by large enthusiastic crowds. Everyone has a raucous time. In Goa, it is called Chikal Kalo or playing in mud. It is celebrated on the twelfth day of the month of Asadh in July. This is celebrated by remembering the antics of Lord Krishna the child in Braj Bhumi.

On the appointed day, the residents of Marcel gathered in strength to play. According to Kalpesh Naik, who went to Marcel for the festival, it was a fantastic experience. Kalpesh said, “Participation was very good. You have to remember this is a tradition that is over 300 years old or even older and it is an occasion for families to come together and watch. There were more than 150 participants who were on the field. Each game takes around an hour and a half to complete.” He said it was very noisy, with some people praying and others just revelling in the spirit of the celebration. Several men, he said, also applied oil on their bodies, to possibly protect them against any infection. With tilak on the forehead, each participant circumambulated the temple and then headed to the mud-filled space.

No commercial activity is allowed in the vicinity though plenty of food and sweets are available. He informed that some other games played on the occasion were Mendrani, Dharchyani or Dog and Bone, Tug of War, Kabbadi, etc.

When asked about the origin of the festival, he said it probably came about due to the outcome of the natural and cultural setting of the place. It perhaps signifies the importance of nature in the state’s culture.

However, in Goa like in the rest of the country, there are other theories propounded too. During Portuguese rule, the colonial rulers destroyed Hindu temples, so most of the people, in an attempt to protect their deities, shifted their temples to Ponda as that region was then ruled by a Hindu ruler. Some temples were brought to Marcel as well. So it’s possible that this festival was started to unite people, who had come from different regions. It helped them bond.

According to Kalpesh, one of the best thing that comes out this festival is that it includes peoples of all kinds, irrespective of what caste or class they belong to. He concluded by saying, “It is said that once you are covered in mud, all are of the same colour, so all are equal. This is the thing I admire the most about Chikal Kalo.”