Traditional fishermen complain of loss in business; Fear their identity too will perish if such situations continue 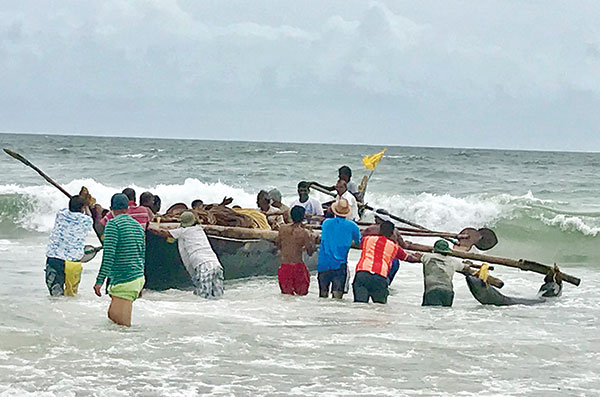 MARGAO:  The prevailing State-wide curfew in the wake of COVID-19 pandemic and the recent Cyclone Tauktae, which left its trail of destruction across the State, have affected the business of nearly 100 ramponkars (traditional fishermen), who now apprehend that if such situations continue then not just their business, their identity too will perish.

Highlighting the plight of nearly 100 traditional fishermen or ramponkars, who are badly affected due to the curfew and Cyclone Tauktae, Niz Ramponkarancho Ekvott president Ebel Barreto said, “We are down to zero. Our business has gone from bad to worse and we don't know how to survive in these circumstances. Few of our members have no other side-business to recover from the losses. If such situations continue then not just our business, our identity too will perish.”

Besides Ebel, there are nearly 100 traditional fishermen or ramponkars who are badly affected on account of the curfew imposed due to spike in COVID cases and also because of Cyclone Tauktae. The April-May season, which is the most favourable for their business, has gone down to zero as they are facing a lot of hardships to survive in these testing times.

Ebel, who is also a traditional fisherman from Cavelossim, Mobor said, “First of all, we lost our business season due to the curfew imposed by the government in the wake of rapidly increasing COVID cases.  April and May are two months, before the fishing ban where we can earn something extra by the traditional way of fishing. Section 144 CrPC restricted our fishing activities, as we could not venture into the sea, besides public refrained from buying fish," he complained.

He said, “Cyclone Tauktae further added to our misery, which resulted in huge losses to our business.  At the moment due to such situations, our finances are zero. For the last month and a half, we have no business. Hence, we don't know how to survive".

There are nearly 50 registered members of traditional ramponkars and fishermen under Niz Ramponkarancho Ekvott, besides there are over 50 other traditional fishermen in South Goa.

He informed that the most traditional fishermen do not have any other side business and their survival is at stake.

Pele Fernandes, a traditional fisherman from Benaulim said he along with several others have been forced to shut their business and sit at home.

"We are small fishermen and we carry out our fishing activities by venturing into the sea with minimum equipment. Ours is a small business and hence we have to depend on the catch. However, due to the curfew, we are at the receiving end," he complained.

"A few days ago there were weather reports by the IMD stating that the sea will be rough and fishermen should not venture into the sea. However, there was nothing of that sort during the days mentioned in the reports. As a result, we lost business. Such types of inaccurate weather reports affect our business," he claimed.

Sixty-five-year-old Minguel Fernandes said their earnings depend on the catch which is too small in quantity.

"We hardly get any subsidy from the government as compared to the trawler owners. I depend on the daily income and at the moment we have nothing," he claimed.

The curfew imposed by the government and Cyclone Tauktae have badly affected the traditional ramponkars of South Goa, just at a time when business would have been at its peak, before the implementation of the fishing ban.