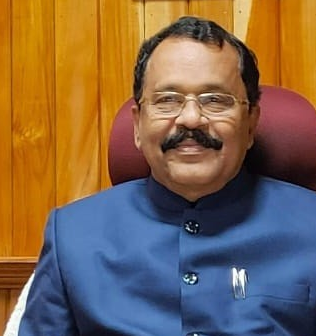 MARGAO/CUNCOLIM: Governor of Goa PS Sreedharan Pillai has said he is more interested in going to the people and doing maximum for the betterment of Goans, as he visited South Goa District Hospital, besides Lar de Santa Terezinha, Pajifond, and Matruchhaya Balika Kalyan Ashram on Wednesday.

He further said that he is happy to meet the special people whose care is taken by almighty God.

"These institutions are working hard and sincerely take care of humanity. Service to the people is considered as service to God. Culture of our country is "Sarva Dharma Sambhav" meaning all religions are equal. Ours is the country which welcomes and respects every religion and works together keeping in mind that human beings are the only religion which should be given importance", he stated.

Governor further said Raj Bhavan with the coordination of Union and State Government will try its level best to help the institutions which take care of humanity.

He appealed to the inmates and management to visit Raj Bhavan once the situation of pandemic ends.

"Responsible citizens should reach to the downtrodden and weaker section of the society to give them a helping hand in whatever way one can, '' he said.

He said he is more interested in going to the people. Good modern medical facilities are provided by the Government in the State, he said. Discretionary funds will be increased by Raj Bhavan in the near future, he said.

While welcoming at Lar De Santa Terezinha, Pajifond, Margao Director, Fr Silvester Dsouza said their institution which was founded in 1947 is the oldest orphanage in Goa which is managed by Carmelite Monastery. Presently there are 34 inmates in the age group of 18 to 34 he said.

Leader of Opposition and Margao MLA Digambar Kamat; Additional Collector, IAS, Sanjit Rodrigues, Fr Ronaldo D'souza, and others were present on the occasion.

Financial assistance under Raj Bhavan discretionary fund for dialysis patients and orphanages was handed over to the beneficiaries by the Governor.