The fields of Majorda, sprout fresh seeds of people’s protest against draconian projects

Goencho Ekvott, citizens from across Goa and 2 MLAs across party lines vow to walk the last mile against projects that are “anti-people” 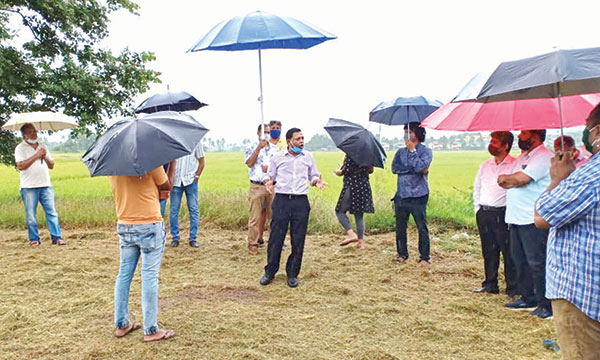 MAJORDA: With verdant open fields in the background and the gradually darkening sky above, a historic gathering of the Goans from various places of South Goa and two MLA's from two constituencies cutting across the party lines took place. Gradually, the rains cleared, and so did the clouds, as civil society and NGOs pledged to keep the fight against coal transportation, the railway double-tracking and other projects.

The field was an unlikely and impromptu venue after the original venue owner got a call from the police station asking him not to hold the meeting there. Members of Goencho Ekvott, its frontal organisations, activists, prominent stakeholders from most coastal villages and beyond, braved the steady drizzle to gather right in the middle of the field to have a conversation, each wearing masks and maintaining a distance.

Nuvem’s BJP MLA Wilfred D'Sa and Curtorim Congress MLA Aleixo Reginaldo Lourenco were not just present but spoke and pledged to be with the people (see boxes).

The meeting started with Royola Fernandes, from Navelim saying, “we need to raise over voice against unjust and wrong things. We need to stand up for our children and future generations and should not allow anti-people projects. We need to unite to stop Goa from becoming a coal hub.”

Creson Antao from Majorda a footballer turned panch and now convenor of Goencho Ekvott said, “Why is the government suppressing our voice. In Mollem two ministers like Nilesh Cabral and Deepak Pauskar are meeting people at this very moment. Then why are we people not allowed to have awareness meeting.”

Olencio Simoes, Goenchea Raponkarancho Ekvott general Secretary said this awareness meeting was to create awareness among people that how coal transportation will make Goa a coal hub. The four-lane road widening, nationalisation of six rivers to transport coal, double-tracking has all been mentioned in Sagarmala report.

Simoes further said that the move to make shipping corridor, coal corridor, giving autonomy to Port are all moves to make Goa a coal hub. How will this coal benefit Goans? How will the Goa government benefit from coal transportation? How will tourism flourish if coal in large quantities is allowed? All around the world, coal has been opposed then why Goa is accepting and going ahead to have coal transportation," he questioned.

Capt.Viriato Fernandes the main speaker for the awareness program said people have come out for our future generation. It is our moral responsibility to preserve and protect Goa. In 2014 the destruction of Goa started. It is payback time. 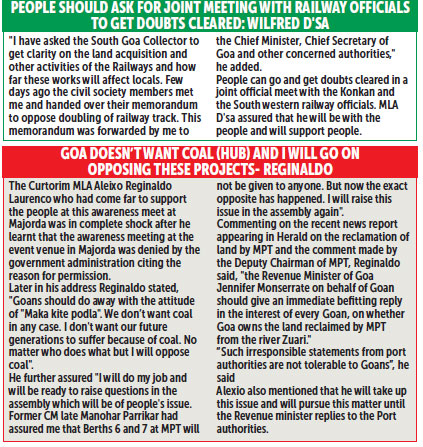 He further said the double standards of the government were fully exposed today when they tried to suppress the peoples’ voice against double-tracking meant to transport coal through Goa leading to the destruction of the environment by trying to stop the people from holding the planned awareness program in Majorda in the name of COVID situation.

He charged, "The govt which has become a slave of the crony capitalists like Adani and Jindal and it's just a matter of time people will force them to stop the coal transportation through Goa. The people will strike in a much bigger manner and will force the MLAs to extend support in this struggle to save Goa," Captain added.

Savio Lopes, the executive member of Goencho Ekvott, said that in the name of COVID govt is doing whatever they please. Next time, people in large numbers should come for awareness meetings on some mega projects. We need to have freedom of expression as it is our right. Come to the people, take their views and then do what is need to be done.”

A youth named Silroy, from Utorda said, “I have come here because I don't want coal. Indirectly we inhale the coal dust. Our houses are turning red because of coal dust settling on houses.  We all have to stay together and to continue to fight. People raise objections, write letters to the Railways but no reply has come to the people. People must not fear and should come forward and question the activities of the railways," he said.

A senior citizen from Cuncolim, Dr Jorson Fernandes also joined this meeting. He had come from Cuncolim. Dr Jorson in his address said, I have written several letters asking for some issues but the Goa State Pollution Control Board has not replied. It is citizens right to get answers to what is happening around us.

Orville Dourado, Convenor of Villagers Against the Doubling of South-Western Railway Tracks gave a vote of thanks and said this fight must go on.

The clouds had cleared by then and a meeting destinined not to begin ended on a high note.