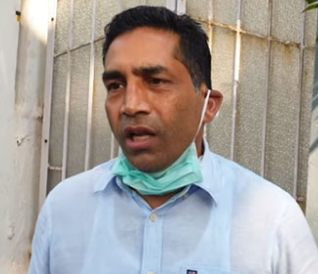 MARGAO: Congress has thrown a challenge to the Tribal Welfare Minister Govind Gaude to clarify his version on the Shel-Melauli issue.

Congress has alleged that the irresponsible statement made by the Tribal Welfare Minister Govind Gaude with regards to the Shel-Melauli anti-IIT protests issue calls for his stand on the issue. Congress says that “this is an insult to the sons of the soil of Goa.”

The Goa Pradesh Congress Committee President Girish Chodankar has said that the cross-questioning by Minister Gaude on the land of Shel-Melauli for IIT and claiming that he has not received any representation from the protesting villagers cannot be accepted.

By purposefully ignoring the fact that the villagers had in July 2020 given a memorandum of their protest to the project to the Chief Minister as well as Tribal Welfare Minister, Congress claimed that Govind Gaude is making a mockery of the issue.

"It is because the land of Scheduled Tribal people is being taken for the project, the organisations like GAKUVED and others are supporting the people of Shel-Melauli, the minister should know this,” said Girish.

"Even Vishwajit Rane after facing the heat of the protests has gone back and wrote a letter to the Chief Minister not to have the project in the village. The Tribal Welfare Minister Govind Gaude is purposefully ignoring the troubles of his own people to retain his chair," alleged Congress.