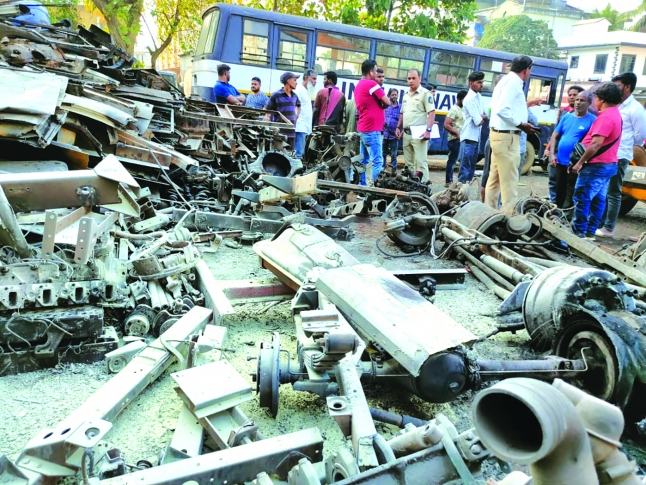 MARGAO: Two labourers working at a scrapyard at  Chandrawaddo, Fatorda, were seriously injured in a blast that occurred when they were cutting a scrap vehicle using a gas-powered cutter. Both men have been admitted to the South Goa District Hospital for treatment.  The locals have demanded that the scrapyard be shut and shifted to the Nessai Industrial Estate, which has other scrapyards. They threatened to block the Fatorda roads in protest, if appropriate action is not taken at the earliest.

“I live nearby and we heard a loud blast. When we came here, we saw these two workers injured, with their skin burnt. This is the third time such an incident has taken place. We want this scrapyard sealed as our lives are at stake,” said Noor Sayyed. Concessao Barbosa, a local farmer, added that there are schools nearby, including Presentation High School, and that the young students who walk down this route could also be injured if there is an accident. He also complained that dust from the scrapyard enters their farms.

Local municipal councillor Camilo Barretto urged the government to take cognisance of the locals’ demand and shut the scrapyard immediately, in the interest of the public, as it is a residential area with schools nearby.  The local police were also at the site to investigate the blast.